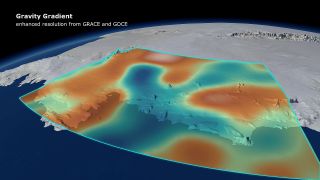 So much ice has disappeared from West Antarctica in recent years that Earth's gravity is now weaker there, researchers reported in the Aug. 28 issue of the journal Geophysical Research Letters.

Earth's gravity fluctuates in small ways that are caused by changes in mass. When hefty ice sheets melt, there is less ice and thus less gravitational force pulling in that area.

Each space mission consists of two satellites orbiting near each other. Slight distance changes occur between the satellites as they dip or rise over gravity highs and lows. Computers translate those shifts, sometimes smaller than a hair's width, into an estimate of Earth's gravity field.

The precise measurements suggest West Antarctica shed some 209 billion metric tons (230 billion tons) of ice each year between 2009 and 2012. This region of Antarctica may have passed a tipping point into unstoppable collapse, according to earlier studies published this year.

The research team, led by Johannes Bouman from the German Geodetic Research Institute, now plans to analyze ice loss from all of Antarctica, according to a statement from ESA. The GOCE satellite mission ended in 2013, when the machines ran out of fuel (as planned) and broke up in Earth's atmosphere.