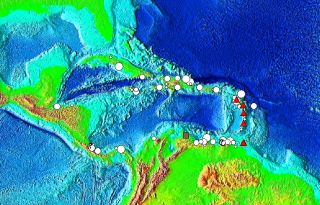 Tsunami source locations in the Caribbean Sea. The symbols indicate the cause of the tsunami: Brown Square is a landslide, Red Triangle is a volcanic eruption, Question Mark is an unknown cause, and White Circle is an earthquake and the size of the circle is graduated to indicate the earthquake magnitude.
(Image: © National Geophysical Data Center/World Data Center)

SAN FRANCISCO — Deadly tsunamis threaten Puerto Rico, the Virgin Islands and the rest of the Caribbean and are an overlooked hazard in the region, geologists reported at the annual meeting of the American Geophysical Union here last week.

The Caribbean's beautiful tropical islands and coral reefs are strung along the junction of several major and minor tectonic plates. Many sit above a subduction zone, where two plates meet and one slides protestingly under the other, down into Earth's mantle. Other islands, like Haiti, straddle strike-slip faults, where plates slide side by side. The last decade's devastating earthquakes in Haiti and Sumatra have brought increased attention to the Caribbean, and scientists at the meeting compared the setting to that of Sumatra, Indonesia, both for its complexity and the risk of tsunamis and giant earthquakes.

Two studies presented at the AGU meeting unearthed historical reports that show the eastern Caribbean's 1843 Lesser Antilles earthquake was as intense as Sumatra's 2005 Nias earthquake, a magnitude 8.7, which killed 1,300 people in Indonesia.

"There really is a preponderance of evidence for a very large magnitude earthquake," said Susan Hough of the U.S. Geological Survey (USGS). "The simplest explanation is that it was a Nias, Sumatra-style mega-thrust rupture."

More than 40 nations and territories, both islands and along the coast, could suffer damage from a tsunami from the region's subduction zones. Landslides from volcanoes falling into the sea are another hazard — giant masses of falling rock acts like a paddle on the water, sending a great wave into nearby islands.

Haitian-style strike-slip earthquakes can trigger submarine landslides, and the 7.0 magnitude earthquake in 2010 did cause a local tsunami on the island's south shore, according to a 2010 study by geologists at the Georgia Institute of Technology.

Earthquakes in Europe are also a documented source of tsunamis in the Caribbean, including ones from as far away as Portugal. A 1755 earthquake in Portugal sent a tsunami westward across the Atlantic, washing over Anegada Island in the British Virgin Islands, geologist Brian Atwater of the USGS reported at the meeting. [History's Biggest Tsunamis]

Historic accounts detail up to 100 possible tsunamis in the Caribbean, with 27 since the 16th century. More than 3,500 people died in tsunamis between 1842 and 2010, compared with the 579 in the eastern Pacific (Hawaii, Alaska, and North and Central America) in that same time period, Christa von Hillebrandt-Andrade, manager of the National Weather Service's Caribbean Tsunami Warning Program, reported at the meeting. Half of those deaths (1,600) came from a tsunami in 1946, associated with an earthquake in the Dominican Republic. The short distance between coastal cities and earthquake epicenters leaves little time for warnings, and the region historically lacked the infrastructure (seismic monitoring stations, a coordinated response) for disseminating warnings, she said.

In cruise season, upward of 20,000 people on massive ships dock in tsunami inundation zones, such as at Charlotte Amalie Bay on St. Thomas, part of the U.S. Virgin Islands, where a 20-foot-high (6 meters) tsunami wave hit on Nov. 18, 1867. The earthquake that caused the tsunami struck in Anegada Passage, between Puerto Rico and St. Croix, and was an estimated 7.5 magnitude.

The Dec. 26, 2004, Sumatra earthquake, which generated deadly tsunamis, galvanized scientific interest in potential Caribbean hazards and made funding available for research and safety planning in the region, von Hillebrandt-Andrade said.

In March 2011, 32 countries participated in the Caribbean's first full-scale tsunami warning exercise. The test was based on a fictional earthquake measuring magnitude 7.6, located off the coast of the U.S. Virgin Islands.

Of 40 community areas in Puerto Rico, 26 meet the criteria of the National Weather Service's TsunamiReady program, a public education and government preparation plan that includes beach signage and local outreach. Anguilla is the first and only non-U.S. territory to meet the program's criteria.

Currently, tsunami warnings come from Alaska or Hawaii, but the United States and international partners in the region are moving toward completing a local warning system based in Puerto Rico by 2014, funded by the United States, von Hillebrandt-Andrade said. A Caribbean tsunami information center will be hosted in Barbados.

In the 2011 Tohoku, Japan earthquake that generated a massive tsunami, "just two minutes made the difference between life and death in the evacuation," von Hillebrandt-Andrade told OurAmazingPlanet. "By having a warning center in the Caribbean, not only would we be able to research the sources of the tsunamis much better, but we'll also be able to do a quicker analysis and also have products that are culturally and socially useful for the decision makers in the countries."

Editor's note: This article was updated to reflect that the Portugal tsunami crossed the Atlantic Ocean.