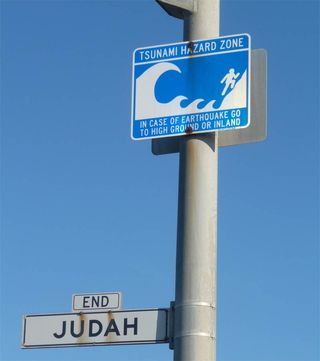 The 8.9-magnitude earthquake and tsunamis off the coast of Japan were expected to send large waves along the coast of San Francisco, here at Ocean Beach.
(Image: © Mike Wall)

They knew all of this thanks to a sophisticated tsunami warning system, which began delivering information to researchers and authorities around the world just minutes after the quake hit. This system can help gawkers plan out their day, but it's designed to keep people safe.

Quake-triggered tsunamis can race across the Pacific at speeds of 600 mph (970 kph) or more, inflicting tremendous damage when they finally reach shore, according to the U.S. National Oceanic and Atmospheric Administration (NOAA).

To help detect and characterize these destructive waves, NOAA has deployed a phalanx of sentinel buoys. The first six Deep-Ocean Assessment and Reporting of Tsunami (DART) buoys were put out in 2001, and 32 were in place throughout the Pacific by 2008. (NOAA has deployed 39 DART buoys worldwide.)

Each DART station consists of a floating buoy moored to a monitoring instrument on the ocean floor. This sensor measures temperature and pressure every 15 seconds, detecting tsunamis by the pressure changes they cause. The device converts pressure readings into estimates of sea-surface height, giving researchers an idea of how big the coming waves will be. [History's Biggest Tsunamis]

These monitoring devices relay their readings to the surface buoys, which beam the information to scientists in real time. Researchers combine this information with seismic information about the quake and data from tidal gauges along various coasts to gain an integrated, detailed picture of any incoming tsunami.

Detecting and characterizing a tsunami are only half the battle. To help keep people out of harm's way, this information needs to be disseminated quickly and efficiently.

NOAA's two tsunami warning centers — one in Hawaii and one in Alaska — take point in this effort. The Hawaii branch — known as the Pacific Tsunami Warning Center — provides warnings to almost every country around the Pacific rim, and to most Pacific island nations, NOAA officials said.

International coordination is facilitated by the United Nations, via its Intergovernmental Oceanographic Commission.

The Alaska center takes the lead in sending messages and warnings throughout the mainland United States, and NOAA's National Weather Service (NWS) helps spreads the word. Coastal NWS offices, such as those in Seattle or San Francisco, activate their Emergency Alert Systems, sending warnings out via TV, radio and the Internet.

Local emergency management officials decide what to do from there. They can activate their own emergency communications systems and start evacuating low-lying areas, for example, if the threat is sufficiently grave.

Quake-prone Japan — which sits atop the boundary between the massive Pacific and North American tectonic plates — has its own earthquake monitoring and tsunami warning systems, and experts say they're quite good.

"Japan has the best seismic network in the world," said Dave Applegateof the U.S. Geological Survey. "The Japanese are very experienced in dealing with earthquakes."

The system works — to the extent that it can

The Pacific Tsunami Warning Center and the IOC sprang into action as well. Within nine minutes of the quake, warnings or watches had been issued for Hawaii and other Pacific islands, as well as Japan and Russia, IOC officials said.

"We tried to get the message out as soon as possible after the earthquake," said Laura Furgione, deputy assistant administrator for the NWS.

The Alaska-based tsunami warning center coordinated and issued warnings for the mainland United States and Canada, predicting when waves would hit and how big they would be when they came ashore.

The wave-watchers here in San Franciso took advantage of that information, peering at a mighty, restless ocean and snapping photos from the dune-tops.

Though the system often works quite well, it sometimes can't work fast enough. Near the quake's epicenter, the waves were huge, powerful and destructive. Warnings went out three minutes after the quake, but along parts of the Japanese coast, the waves arrived just 10 minutes later, according to media reports.