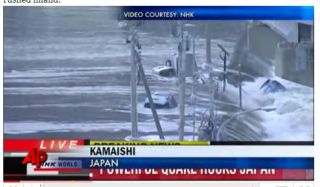 An 8.9-magnitude earthquake off the coast of Japan today triggered tsunami warnings as far away as the West Coast of the United States. How do you prepare for a tsunami?

The only thing you can do in a tsunami is to get out of the way, according to public safety agencies. A tsunami isn't like a regular ocean wave; it's more like a raging river full of debris. According to the California Emergency Management Agency, people in tsunami hazard zones should move to higher ground after earthquakes and stay there. Tsunamis may surge hours after an earthquake, and many consist of more than one wave. [Continuing coverage of Japan disaster]

The National Weather Service (NWS) issues tsunami watches and tsunami warnings. A tsunami watch means that there is a risk for a tsunami, but the existence of a wave has not yet been verified. If a tsunami exists, it may be less than an hour away.

In the case of a tsunami watch, the NWS advises preparing for evacuation. Residents of low-lying areas should check their emergency supply kits and pack any special medications while monitoring local news, Coast Guard updates, or updates on the National Oceanic and Atmospheric Administration (NOAA) weather radio.

In a tsunami warning, residents of low-lying areas should evacuate and head to higher ground, according to the NWS. If time permits, homeowners should turn off electric and gas services at the main. Once evacuated, don't return home until local officials issue an all-clear.

One immediate warning sign of a tsunami is a dramatic drawback of water from the beach. If the water line suddenly recedes, run for higher ground.

Forecasters can't predict how big a tsunami will be at any given location because wave height can be dramatically affected by the shape of the coastline and whether the seafloor slopes gradually or drops off sharply.

"You're never sure until the wave comes in, and then it's too late," said Federal Emergency Management Agency (FEMA) Adminstrator Craig Fugate, who urged residents of the U.S. West Coast to heed local evacuation warnings. Local officials are best able to interpret the risks and make decisions about how devastating a tsunami might be.