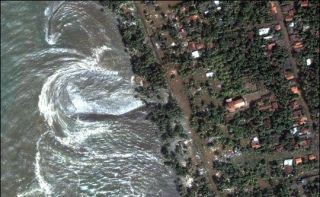 In this shot, water rushes ashore in Sri Lanka during the Indian Ocean tsunami of 2004. The tsunami killed more than 220,000 people around the world and prompted U.S. officials to focus on tsunami preparedness closer to home.
(Image: © NASA)

Just over a week after the natural cataclysms in Japan demonstrated the devastating force of tsunamis, people from Florida to California to countries around the Caribbean are slated to test their own readiness in the face of an oncoming — yet fictional — wave.

On Wednesday, March 23, as part of a long-planned drill, the U.S. National Oceanic and Atmospheric Administration's two tsunami warning centers will issue a series of warnings simulating earthquakes and tsunamis along two different fault lines.

There are some exceptions, but typically the PTWC handles tsunami warnings for foreign shores and Hawaii, while the WCATWC is in charge of warnings for U.S. coastlines and territories and for Canada.

"We issue the bulletins," said Stuart Weinstein, assistant director of the PTWC. However, Weinstein told OurAmazingPlanet, the extent to which a given community or country participates in a drill is beyond the agency's control.

"If they have sirens and they want to use them, that's up to them," Weinstein said.

The simulated Pacific Ocean tsunami will be "generated" by an earthquake along the Cascadia fault, which lies roughly 50 miles (80 kilometers) off the Pacific Coast of North America, and stretches from northern California to British Columbia, Canada.

The imagined rupture is planned for a region on the Cascadia fault along the same latitude as Eugene, Ore.

The Cascadia fault is capable of violent, dramatic moves of a scale comparable to the recent Tohoku earthquake and ensuing tsunami in Japan. In addition, the seafloor subduction zone — a region where two tectonic plates collide and one is shoved underneath the other — is located a similar distance from shore as the subduction zone that ruptured in Japan.

However, due to the real tsunami generated by the Japanese earthquake, some California emergency management agencies have cancelled participation in the drill, according to officials in Del Norte County.

The region is home to Crescent City, a town whose harbor suffered perhaps the worst damage in the United States from the recent tsunami because of coastal and seafloor features that acted to magnify the tsunami waves and focus them on the city.

Although tsunami sirens aren't scheduled to sound in Del Norte on Wednesday morning, some institutions are still planning to conduct their own drills.

Though some in California will be opting out of this year's drill, in the Caribbean, participation will be strong, according to the United Nations, which said that 33 countries in the Caribbean will take part in the tsunami drill for the first time.

Such exercises in the region are absolutely crucial, according to Barry Hirshorn, a geophysicist with the PTWC.

"There's a tremendous hazard in the Caribbean basin," Hirshorn said, because of a big subduction zone near Puerto Rico.

Wednesday's simulated tsunami, scheduled for around 9:00 a.m. local time, will be based on a real event — an 1867 magnitude 7.3 earthquake in the region that generated a powerful tsunami. Thirty-two-foot (10-meter) waves crashed ashore on the island of Guadalupe, and waves as high as 24 feet (7.6 m) hit St. Croix in the U.S. Virgin Islands.

The imagined tsunami will be generated by a 7.6 magnitude earthquake, followed by another earthquake of a similar magnitude five minutes later, on a fault that lies between Puerto Rico and the Virgin Islands.

Hirshorn said even in a perfect world where tsunami warnings are issued in time and civil defense infrastructure is in place, the system falls down without public awareness.

"Drills are absolutely necessary," Hirshorn told OurAmazingPlanet. "Because the more you drill, the more effective it may be when the real thing happens."

He added: "Ironically, the Japanese are the furthest along on this and I think that's why they may not have had even more casualties than they did."