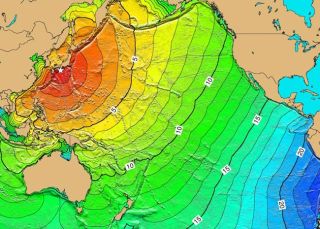 The 8.9-magnitude earthquake that struck Japan last Friday (Mar. 11) sent a deadly wall of water roaring ashore the country's main island of Honshu, killing hundreds and washing away cars and buildings in a deadly tide of debris.

The quake, which ruptured about 80 miles (130 kilometers) from Japan's northeastern coastline, occurred when one tectonic plate dove violently beneath another, causing a nearly 300-mile (480-km) swath of the seafloor to lurch upward, generating a tsunami.

The devastation in Japan was swift. The monster wave arrived less than two hours after the quake — the world's fifth-largest on record. However, an ocean away, calculations were under way to see what the tsunami would do over the coming hours.

Shortly after the temblor, the U.S. National Oceanic and Atmospheric Administration (NOAA) released a comprehensive list of estimated tsunami heights and arrival times for the North American coast, and watches and warnings were issued from Alaska to California.

Formulating those predictions can be a tricky business.

Uri ten Brink, a research geophysicist at the U.S. Geological Survey, said figuring out how fast a tsunami will move is fairly straightforward.

"What is hard to predict is the level of the tsunami generation — the amplitude of the wave," ten Brink told OurAmazingPlanet.

A tsunami has two key ingredients that are important for scientists trying to model how a given wave will behave: amplitude and wavelength.

Amplitude is essentially how tall a wave is, from peak to trough. Wavelength is the distance between each peak.

Ten Brink said these qualities can be illustrated by simply turning on a radio. Turn up the volume, and you've just adjusted the sound waves' amplitude. But changing the volume on your radio doesn't alter the sound's pitch — its wavelength.

Scientists at federal agencies are using a newly developed tool — a modeling system — called MOST (Method of Splitting Tsunami) to help predict how tsunamis will develop.

The system, widely adopted just last year, has vastly improved predictions of a tsunamis' behavior and effects — wavelength and amplitude among them — and as a result, tsunami warnings have become far more detailed and accurate, according to Costas Synolakis, a professor and director of the Tsunami Research Center at the University of Southern California who, along  with NOAA's Vasily Titov, developed MOST.

MOST models a tsunami from generation to target, Synolakis said, "from the moment it's generated underwater to the maximum penetration point inland."

Even MOST's initial forecasts of tsunami effects, formulated before all the data from buoys scattered around the Pacific Ocean were incorporated, were very accurate, Synolakis said. In addition, the model adjusts itself along the way, changing predictions as conditions and data change.

Although MOST is a huge step forward, Synolakis said, there's always room for improvement, and researchers need better seismic information, more data-collecting buoys bobbing across the world's oceans, and the ability to incorporate GPS data into the model.

"The ultimate goal is to improve the forecast and make it faster when the earthquake happens very close to a coast," Synolakis told OurAmazingPlanet, adding that the vast amount of data collected in the aftermath of the Japan earthquake will prove invaluable to the scientists trying to improve tsunami models, and perhaps save lives in the future.

"I guess that's a silver lining," he said.