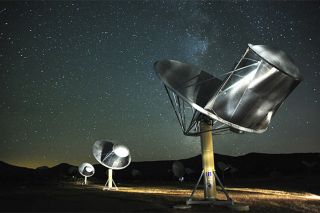 Astronomers seeking out extraterrestrial intelligence have used a powerful radio telescope to eavesdrop on a star system that is relatively close to Earth in the hope of hearing the faint radio whisper of an alien civilization.

Using the Allen Telescope Array (ATA) located in California (pictured top), members of the SETI Institute chose Trappist 1 as they know the red dwarf-type star plays host to at least 3 exoplanets. Traditional SETI searches have looked to random stars in the sky in the hope of detecting an artificial radio signal using luck and some educated guesses. But now we know certain stars play host to exoplanets, alien hunters can be a little more discerning with the selection of stellar targets.

RELATED: Sending Messages to Aliens: Could It Kill Us?

Known as "targeted SETI", the ATA has been used to "listen in" on star systems that NASA's Kepler Space Telescope and other exoplanet-hunting missions have confirmed the presence of exoplanets. Even better than that, as Kepler can identify the physical size and orbit of a given exoplanet, astronomers can deduce whether that planet is located in the star's "habitable zone." The habitable zone around any star is the distance at which a hypothetical rocky planet can orbit that is not too hot or too cold for liquid water to exist. As we know from life on our planet, where there's water, there's life; could intelligent alien life be living on one of these potentially habitable worlds?

If so, they might be transmitting radio waves. However, for us to stand a chance of detecting their signals, they either need to be deliberately blasting a radio beacon in our direction with the explicit purpose of communication or they need to live in a relatively nearby star system for us to detect their accidental leakage of radio waves into space.

Earth has been leaking a faint radio signals into space for over 100 years since the advent of commercial radio transmissions around the globe at the beginning of the 20th century. More recently, we've been pinging asteroids and the planets with powerful radar. And let's not forget the controvercial Messaging Extraterrestrial Intelligence, or METI, a practice that has unsettled some scientists. Therefore, in theory, any intelligent aliens living within 100 light-years of Earth -- assuming they possess sensitive enough radio receivers -- could be aware of our presence.

And this is what SETI is doing: listening out for alien transmissions that, so far, have proven inconclusive.

However, last year, Kepler discovered a bizarre transit signal from the star KIC 8462852, otherwise known as Tabby's Star. Kepler detects exoplanets by detecting their faint shadows cross the faces of their host stars. When Kepler detected Tabby's Star transit, it was like nothing it had ever recorded; the brightness dip dimmed around 20 percent. Though the generally-accepted hypothesis is that a swarm of comets may have caused this strange transit signal, there's another idea that it could be evidence of an advanced alien civilization building a "megastructure" around their star.

Tabby's Star quickly became a target for SETI, but no transmissions were detected by the ATA.

According to a SETI Institute news release on Wednesday, even if there were transmitting aliens at Tabby's Star, the fact it's nearly 1,500 light-years away would make the detection of alien radio signals extremely unlikely, unless said aliens were deliberately beaming extremely powerful radio waves right at us.

RELATED: The Hunt for Alien Intelligence is Going Infrared

This is why Trappist 1 was selected for a follow-up SETI investigation. Though there's no evidence of weird transit signals around this small star, it is an ancient compact planetary system that might, after some assumptions, be considered habitable. What's more, Trappist 1 is only 40 light-years away -- pretty much on our interstellar doorstep. Any signal transmitted from the Trappist 1 system would be a thousand times stronger than a signal of identical strength transmitted from Tabby's Star.

So, for 2 days in May, the ATA focused on Trappist 1, seeking out an artificial narrowband signal of around 1 Hz or less. As the headline of this article isn't "Aliens Found!" you can guess what the outcome was: no aliens were detected on this pass. But the ATA did put a valuable upper limit on the strength of a signal if there is a hypothetical alien civilization transmitting a signal at us.

SETI researchers estimate that if aliens are transmitting from that star system, they'd have to build a 300 meter-wide radio antennae (the approximate size of the Arecibo telescope in Puerto Rico) with a transmitter power of 300 kilowatts. Interestingly, the most powerful radio transmitter on Earth operates at around 700 kilowatts, so building a transmitter for interstellar messaging purposes is well within the realms of technological possibility.

So this latest directed SETI campaign drew a blank, but it's helping us probe regions of the radio frequency spectrum and the expected power output from a hypothetical alien civilization -- valuable research if we are to detect and recognize a signal from extraterrestrials in the future.