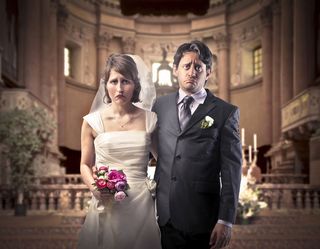 When it comes to sex before marriage, a lot may be better than a little.

New research suggests that women who had exactly two sexual partners (their husbands and one other person) were more likely to divorce than those who had either just one partner or many more. This was true, at least, during the 1980s and 1990s.

Though it's not clear why exactly, the researcher speculated that women who had exactly two sexual partners were more apt to compare their husband to a past lover.

"In short: If you're going to have comparisons to your husband, it's best to have more than one," study author Nicholas Wolfinger, a professor in the University of Utah Department of Family and Consumer Studies and an adjunct professor in the university's Department of Sociology, said in a statement. [10 Scientific Tips for a Happy Marriage]

Historically, the more sexual partners a woman had before marriage, the higher her odds of divorce, the researchers said. But sexual mores have changed dramatically in the last century.

To see if the changing attitudes toward premarital sex affected the risk of divorce, Wolfinger looked at data from three waves of the National Survey of Family Growth, a survey on marriage and sexual behavior. It was collected in 2002, between 2006 and 2010, and between 2011 and 2013.

The findings confirmed what many would believe by simply looking around: Women are much more likely to have premarital sex today than 50 years ago.

"Today's young adults do have lengthier sexual biographies than do people born prior to 1950," Wolfinger said. "Still, the extent of hooking up has been exaggerated by a prurient and overheated media, and sometimes by young people themselves." (Millennials actually have slightly fewer sexual partners than did those born in the 1950s and 1960s, research has found.)

"In general, Americans became more accepting of nonmarital sex. Certainly, fewer men entered marriage with the expectation of a virgin bride. All of the fanfare associated with hooking up is evidence that some young people have become comfortable with the idea of sex outside of serious relationships."

Still, the study found that having more sexual partners was associated with reduced marital stability. Women who married as virgins were less likely to divorce within five years across all three waves of the study — just 11 percent in the 1980s and 6 percent in the 2010s.

"Perhaps it is not unexpected that having many partners increases the odds of divorce. The greater surprise is that this only holds true in recent years. Previously, women with two partners prior to marriage had the highest divorce rates," Wolfinger said.

By the 2000s, women who had more than 10 sexual partners saw their marriages dissolve within five years almost 33 percent of the time, the study found.