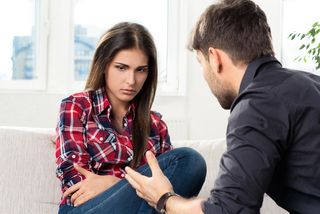 "The breakups of nonmarital heterosexual relationships in the U.S. are quite gender-neutral and fairly egalitarian," study author Michael Rosenfeld, an associate professor of sociology at Stanford University, said in a statement. "This was a surprise because the only prior research that had been done on who wanted the breakup was research on marital divorces."

Previous research had found that women are more likely to initiate divorce, at least in the United States, Europe and Australia. In the new study, Rosenfeld compared divorces to nonmarital breakups, in an effort to understand the driving forces behind each type of breakup. [I Don't: 5 Myths About Marriage]

To investigate, he looked at data from the 2009 to 2015 waves of How Couples Meet and Stay Together, a nationally representative survey spearheaded by Rosenfeld and his colleagues. The new study includes 2,262 adults, ages 19 to 64, who reported having opposite-sex partners in 2009. By 2015, 371 of the participants had broken up or gotten divorced.

Women initiated 69 percent of the 92 divorces, Rosenfeld found. But there was no statistically significant difference between women and men when it came to nonmarital breakups, regardless of whether they were living together, he said.

"Women seem to have a predominant role in initiating divorces in the U.S. as far back as there is data from a variety of sources, back to the 1940s," Rosenfeld said. "I assumed, and I think other scholars assumed, that women's role in breakups was an essential attribute of heterosexual relationships, but it turns out that women's role in initiating breakups is unique to heterosexual marriage."

According to the surveys, married women reported they were less satisfied with the quality of their relationships than married men were. In contrast, women and men in nonmarital relationships reported similar levels of relationship quality, Rosenfeld found.

It's possible that women report lower levels because they experience heterosexual marriage as constraining, oppressive, uncomfortable and controlling, Rosenfeld said.

Researchers have examined the unequal power dynamic present in many American heterosexual marriages. For instance, American women are usually younger than their husbands, earn less money and often take their husband's last name, Rosenfeld said. [The Science of Breakups: 7 Facts About Splitsville]

The book "The Changing Rhythms of American Family Life" (Russell Sage Foundation, 2006) found that, although married fathers increased child care time between 1965 and 2000, married mothers still spent more time overall on family caregiving (41 hours per week for mothers versus 22 hours per week for fathers), Rosenfeld said in the study. Wives also cook and clean an average of 10 hours more per week than husbands do, he said.

In the 1980s, men did substantially less housework than their wives, according to a 2003 study published in the Journal of Family Issues. That study found that "marriages in which the wife felt they were doing more than their share of the housework were especially likely to end in divorce," Rosenfeld wrote in the new study.

In order to learn more about the divorces and breakups, Rosenfeld asked survey participants to write down reasons explaining their splits. Among the nonmarital breakups, people had the following answers:

Among married people who had gotten divorced, people said the following:

The reasons behind each breakup are intriguing, but "it [will] take a study with far greater depth of information than [this one] to fully understand why women are less satisfied in marriage than men are," Rosenfeld said in the study.

The research, which has yet to be published in a peer-reviewed journal, was presented at the American Sociological Association's 2015 annual meeting in Chicago, which is being held from Aug. 22 to 25.