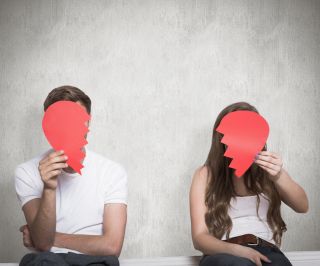 Think back to your last breakup. Did you bounce right back or mope around for weeks? Did you feel pretty much OK or deeply hurt? Your answers to those questions may depend on your gender, a new study finds.

Women tend to feel the emotional pain associated with a breakup more acutely than men, but men take longer to "get over" their former lover, according to researchers from Binghamton University and University College London, both in the United Kingdom. For the study, the researchers asked 5,705 people in 96 countries to rate the physical and emotional pain they felt after a breakup on a scale from 1 (no pain) to 10 (unbearable pain).

On average, women ranked their emotional pain — including feelings like sadness and depression, as well as anxiety, fear and loss of focus — as being slightly higher than those of their male counterparts (a score of 6.84 versus 6.58). Women also reported feeling the physical pain of a breakup (things like insomnia, panic attacks, eating disorders and weight change) more acutely than men, with women rating this pain, on average, at 4.21, versus men's average rating of 3.75. [5 Ways Relationships Are Good for Your Health]

But although the researchers found that women tended to report feeling the physical and emotional pain associated with a breakupmore acutely than men did, they also found that both sexes reported feeling different breakup-related emotions in about the same proportions. For example, when asked about the feelings they had after a breakup, both sexes reported anger and depression more than fear or instability. Similarly, both men and women were more likely to say they had trouble sleeping or struggled with their weight than they were to have panic attacks after a breakup.

So, why are women more affected by breakups than men are? Well, from a scientific standpoint, women typically have more at stake in relationshipsthan men do, said Craig Morris, a research associate at Binghamton University and lead author of the study.

"Put simply, women are evolved to invest far more in a relationship than a man [is]," Morris said in a statement. "A brief romantic encounter could lead to nine months of pregnancy followed by many years of lactation for an ancestral woman, while the man may have 'left the scene' literally minutes after the encounter, with no further biological investment."

This risk of pregnancy tends to make women choosier than men in regard to selecting a mate, Morris said, adding that the mates women settle down with are those they consider to be "high quality" (i.e., worthy of reproducing with). And as the study shows, breaking up with a high-quality mate can hurt, both physically and emotionally, for a woman.

However, the study also shows that men may have a different set of emotional scars following a breakup, the researchers said.

"The man will likely feel the loss deeply and for a very long period of time as it 'sinks in' that he must 'start competing' all over again to replace what he has lost — or, worse still, come to the realization that the loss is irreplaceable," Morris said.