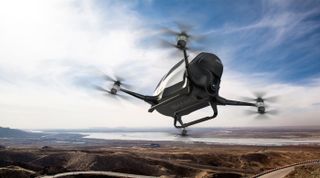 Buckle up, because an autonomous car-sized drone from the Chinese company Ehang is cleared to begin testing in Nevada.

The electric Ehang 184 passenger drone first debuted earlier this year at CES and has the capacity to stay aloft for more than 20 minutes.

RELATED: 10 Wild Ways To Travel In The Future

The Ehang 184 is designed to carry a 220-pound load, fly under 650 feet in the air, and cruise for 23 minutes at an average speed of 62 mph, according to the specs. Electric charging takes two to four hours. The four-rotor drone also uses an app for takeoff and landing. I picture it being sort of like a pedicab that gets airborne.

Recently the Nevada Governor's Office of Economic Development and the Nevada Institute for Autonomous Systems announced an agreement with EHang to collaborate on flight testing, training, and development at the state's FAA unmanned aircraft systems test site. The goal is for Ehang's drone to ultimately get regulatory approval. The people involved called the agreement "historic," but "futuristic" sounds more accurate to me.

"I personally look forward to the day when drone taxis are part of Nevada's transportation system," Tom Wilczek, an aerospace and defense industry specialist for the Governor's Office of Economic Development, said in a press release.

A specific timeline for testing is still in the works but Ehang expects to begin later this year, theLas Vegas Review-Journal reported. If everything works out, it will be a first for the state and the country. Not that getting regulatory approval will be easy. Plus, there are other challenges like the drone's limited 23-minute cruise time and its lack of manual flight controls should anything go awry. Hrm.

Having driven across Nevada once during a cross-country road trip, I'd gladly hand over the controls to a super-safe drone for that same stretch, though. The road was so straight and the surroundings so sparse that I lost perspective and felt like the car could have been going 100 mph or 10. It all felt like a strange dream.

Here's hoping the Nevada testing involves automatic avoidance capabilities for the Ehang 184. There's weirder stuff in the skies out there.

This article was originally posted on Discovery News.