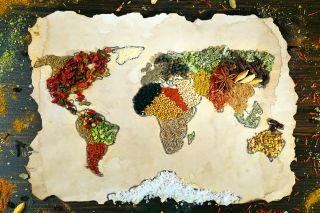 No matter where you go in the world, the key components of a healthy diet remain the same: load up on whole grains and veggies and limit sugary sweets. But countries differ greatly in the images they use to depict their food guides.

The familiar "plate" design of the U.S. food guide, which aims to show portion sizes of various food groups, is a far cry from China's food pagoda, and Fiji's food-guide pineapple.

To see what food guides look like around the world, Live Science checked out the displays from 70 different countries. We found food guides highlighting local food staples and others targeted to indigenous populations. And we saw countries getting really creative with their food guides.

Here are the results from our virtual tour around the world. [6 Distinctive Food Guides Around the World]

In 2011, the United States replaced its iconic food pyramid with a plate, but food pyramids still dominate the landscape: Out of the 70 countries included in our analysis, 24 use pyramids to depict their dietary guidelines. The shapes are particularly popular in Europe, where 15 countries, from Albania to Spain, use pyramids.

We found that the second most popular food-guide design is a plate. In addition to the U.S., 10 other countries choose to display their recommendations in plate form. These nations include Mexico, Malta and the United Kingdom.

Somewhat similar to plate-shaped food guides were another popular choice: circles and wheels. Six countries opt for a circular display, including Australia and the Netherlands.

But off the beaten path of plates and pyramids, other interesting shapes pop up. Cooking vessels are used for a handful of food guides, mainly for countries in Latin America and the Caribbean. We found six countries that use some sort of cooking vessel. Saint Lucia, for example, uses a coal-cooking pot for its food guide, while Guyana opted for a stew pot. In addition, two countries use a basket: Belize and Dominica.  [In Images: Exploring the Caribbean Deep]

Other countries embrace structures for their food guides that highlight those nations' own cultures. For example, Mongolia's food guide is shown as a ger, which is a traditional Mongolian tent. Benin, a country in Africa, uses a traditional house for that nation. In addition, China uses a food pagoda, and Saint Kitts and Nevis, an island in the Caribbean, uses a sugar mill.

And in four countries, the food guides were depicted simply as a food. Both Fiji and the country of Antigua and Barbuda, for example, fashioned their food guides using a pineapple. Other countries use local delicacies: Grenada has a nutmeg-shaped food guide, and the nation of Saint Vincent and the Grenadines uses a breadfruit-shaped guide.

Not every food guide we looked at fit neatly into a category. Take, for example, Jamaica's goat-skin drum, or Canada's rainbow. Thailand chose a flag, while Turkey picked a four-leaf clover. And, surprisingly, we found that not one, but two countries use a spinning top: Japan and Venezuela.

It's often said that people should drink at least eight glasses of water daily, but you won't find water on the United States' plate graphic. However, many countries include water in their displays. Indeed, we found that exactly half of the countries in our analysis signaled to their citizens that it's important to stay hydrated.

In some guides, pitchers or drops of water are depicted next to or in the center of the display, but some countries get more creative. For example, in Benin's food guide (a traditional house), there is a bottle of water and a glass in the doorway. And Venezuela has water streaming from the top of its spinning-top display.

Other countries, such as Romania and Latvia, made water the base of their pyramid displays, along with one other thing: physical activity.

But how does a country include physical activity in a food guide? By flexing its creative muscles.

In Belize's food guide, which is a basket, people are depicted doing various forms of exercise — such as biking or swimming — across the handle of the basket. And in Japan's spinning-top food guide, a human figure is depicted running on top of the object.