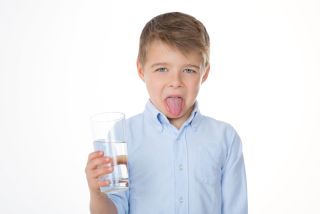 Tap water comes in many flavors. In fact, it can be so specific to each locality that some people consider it the secret ingredient in New York bagels and pizza. But unpalatable drinking water can prompt people to scramble for filters, trying to rid their water of the flavor of pennies, dirt or bleach.

Moreover, people may worry that funny-tasting tap water may carry dangerous substances or pathogens. There is evidence that tap water has been the likely source of some disease outbreaks, including Legionnaires' disease and gastrointestinal illnesses, although, in many outbreaks, researchers can't be sure of the culprit.

In any case, the link between how water tastes and what's in it isn't straightforward.

"Unfortunately, whether or not you can taste something, to my knowledge, is not highly correlated to whether or not there's something to worry about," Dr. Robert Wright, a pediatrician and chair of preventive medicine at Mount Sinai School of Medicine in New York, said in an interview with Live Science.

For example, arsenic, nitrates and infectious agents, such as bacteria and viruses, don't have a strong flavor but can cause serious health issues. Another dangerous substance in water, lead, doesn't have a very obvious taste, or can sometimes even taste sweet. [Tip of the Tongue: The 7 (Other) Flavors Humans May Taste]

Researchers do know that the likely origins of many tap water tastes are mostly harmless beyond being unpleasant. However, there are certain flavors that can signify an issue in the water supply. If people taste those flavors, or notice any sudden or extreme changes in their drinking water's taste, they should notify authorities, experts told Live Science.

Water systems can be very complex, and tracing the causes of different tap water flavors can be just as complicated. When we turn on the tap, "It's not magic. It comes from somewhere," Wendy Heiger-Bernays, an associate professor of environmental health at the Boston University School of Public Health, told Live Science.

About 15 percent of people in the United States use well water, according to the U.S. Environmental Protection Agency. This means that their water does not come from a municipal source but from a private well. People who have wells must take it upon themselves to test their water regularly, which can be costly, Wright said.

The other 85 percent of the U.S. population gets their water from municipal systems. Whereas almost all well water is groundwater, municipal water may come from surface sources, such as rivers and lakes, or a combination of sources. This water takes a long journey, from a treatment plant, through pipes underground and often below city streets, and finally through the pipes in homes. Features of all of those pipes, as well as the source of the water itself, can influence the final taste of what comes out of the tap.

But the flavor of water isn't usually a taste issue in the strictest sense. "Most tastes are almost entirely the odor that [comes from] the water," said Theresa Slifko, a manager at the water quality laboratory at the Metropolitan Water District of Southern California (MWD). MWD has a panel of four to five people who both taste and sniff their water supplies, because they can often detect odor and flavor at much lower levels than other analytical methods. [8 Strange Things Scientists Have Tasted]

Undesirable flavors include earthy, sulfuric, chlorine, metallic and swampy. These flavors may originate from algae, bacteria, disinfectants, wildfires, minerals and decaying vegetation, but for the most part, these things are not generally dangerous to people's health.

Here is a look at some of the flavors of tap water, and what causes them.

The likely reason for any of these tastes is algal blooms in the source water, and for that reason, this taste may be more apparent in spring or other times when blooms are more likely, Heiger-Bernays said. Municipal water is treated, so there shouldn't be any algae in it, but the taste may linger, she said. Another reason for this flavor could be bacterial growth within the water system or even a person's own sink, all of which are usually harmless. [Top 7 Germs in Food That Make You Sick]

These tastes may be the most common flavor in tap water, Heiger-Bernays said. Water may taste like chlorine because many systems use chlorine to disinfect their water supply. Smaller systems are particularly likely to use chlorine as a disinfectant because it's less expensive than other options, such as ozonation (the process of using ozone to disinfect water), she said. Chlorine is generally present in small amounts in treated water and is safe to drink at these levels.

The presence of copper in the water, usually from the corrosion of copper plumbing, can cause these tastes, according to the South Carolina Department of Health and Environmental Control (SCDHEC). People can taste copper at levels of 1.3 milligrams per liter, and at that level, the metal can turn light hair greenish and be toxic to aquarium fish. However, copper only causes health issues — such as stomach cramps and intestinal discomfort — at levels above 60 mg/L.

This taste can also result from a higher-than-normal level of total dissolved solids (TDS), which are dissolved minerals in the water. TDS will cause a medicinal taste if they are mostly sulfates, such as Glauber's salt (sodium sulfate) and Epsom salt (magnesium sulfate). These can cause a temporary laxative effect in people new to drinking this water, according to the SCDHEC. Elevated levels of zinc can also result in a medicinal taste. Zinc can cause nausea and vomiting, but only at levels far above those that would cause people to taste the mineral. Wright said he's never heard of anyone getting sick from zinc in drinking water.

Animals falling into open water supplies may cause this taste, which is often actually more of a smell, according to Southern Water, a company in West Sussex, England. This problem only needs to be addressed if the scent persists, the company says. However, a gasoline smell may also indicate dangerous contamination from nearby fuel sources.

The City of Milwaukee advises checking whether this smell is coming from only one faucet in a home or all of them. If it's only one, it's likely a temporary problem, and even if it continues, it could be fixed by a plumber. But if all faucets have a gasoline odor, people should not drink the water, and the water supplier should be notified as soon as possible. There could be gas or fuel in the water, the city says.

Zinc, iron and manganese can all cause metallic tastes in water. The presence of zinc is generally due to the corrosion of galvanized plumbing, whereas iron and manganese occur naturally in water sources. Water with both iron and manganese may darken the color of tea and coffee, and stain plumbing fixtures, appliances and laundry. These minerals can also build up in water heaters, which then need to be drained regularly to combat deposits. At the levels they are found in drinking water, even though they can be tasted, none of these elements should cause any health problems, according to the SCDHEC.

Chloride compounds occur naturally in water, dissolving in the water as it moves through the earth. High concentrations of chlorides can cause a salty taste and will increase corrosion of plumbing and appliances. The amount of sodium in water can also affect its taste. In certain areas, salt water may get into the drinking water supply. A sudden increase in the saltiness of water could indicate a leak from a saltwater system, and should be reported, Wright said.

A sudden change in saltiness can also mean that sewage has gotten into the water supply, as human and animal waste is high in sodium and chlorides, the SCDHEC says. This is one of the tastes that can signal an increased risk of illness. The sodium in drinking water may be problematic for people on sodium-restricted diets, the SCDHEC says.

Water that tastes or smells like rotten eggs can be the result of various bacteria in the system or may come from hydrogen sulfide, which occurs naturally in water systems due to the decay of organic material. Water agencies don't consider this issue dangerous, but hydrogen sulfide can increase corrosion of plumbing and lead to blackened water that may stain.

Water that tastes or smells like a wet dog may be caused by metal plumbing, bacteria, treatment chemicals or organic material in the source water, according to Waterlogic, a water cooler and dispenser company. Water with this smell is likely safe to drink but should be tested for bacteria, the company says.

This is a unique water flavor that has a burdensome solution. This taste comes from anti-oxidants found in plastic pipes, and the only way to get rid of it is to replace the plumbing, according to England's Southern Water.

The water crisis in Flint, Michigan, has sparked many concerns from the public about tap water quality. Indeed, that situation shows the damaging effects of the failure to take people's complaints seriously, Wright said. But Wright and Heiger-Bernays agreed that the United States, in general, has safe drinking water.

Heiger-Bernays advised people to avoid knee-jerk reactions to convert to bottled water at the first slight changes in tap water taste or smell. However, she did recommend that people who notice a change speak with their neighbors about it. This can help them see if others have also noticed it, and increase their knowledge about how far along in the system a problem — if there is one — might be occurring.

Information about water supplies is often available from local water suppliers and health boards. Local academic institutions may be studying drinking water as well, and may post their recent test results online.

When in doubt, people should not hesitate to ask questions about the water supply, Heiger-Bernays said.