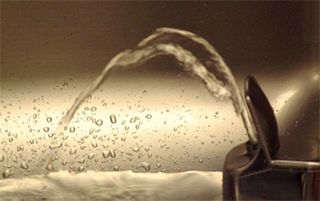 The United States has benefitted from centuries of improvements in drinking water safety, and most Americans can trust that clean water comes from their tap. Yet, closer inspection is showing that on a house-by-house basis, water quality is not guaranteed — even in communities with high marks for water safety.

Marc Edwards, of Virginia Tech University, has been part of a growing contingent of engineers and scientists looking more carefully at the water we drink, and finding that in some cases harmful sources are overlooked.

"From my first job as a consultant — studying a problem with 'blue water' arising from copper corrosion in consumers' plumbing — it became clear to me that water safety issues occurring inside the property line were escaping scrutiny," Edwards said. "Because local and federal regulators are not responsible for overseeing important water problems originating in homes, I've been working to bridge this 'gap to the tap'."

Edwards, an NSF Presidential Early Career awardee, has been studying water quality and safety for more than two decades. In collaboration with his colleagues and students, he's researched water delivery at every step: from water at the source, to the treatment plant, to the tap.

His efforts have taken him from homes and schools to pipelines and treatment facilities, and he's found that at each location, listening to consumers and careful inspection are both key.

"Most tap water in homes is very safe," Edwards said, "but there are isolated problems due to: harmful bacteria which can grow in home plumbing; leaching of lead, copper and plastic constituents from home plumbing hardware; and even human error, when a clean water line can accidentally be connected to contaminated water lines."

Studies like Edwards' have shown how surprisingly complex water delivery can be. For example, work at the U.S. Environmental Protection Agency (EPA) has shown that one type of water treatment that helps kill bacteria can inadvertently leach lead from main-line pipes. Other work has linked certain water treatments to increased numbers of pinhole leaks in copper pipes.

Careful adjustments have to be made — often dependent on the composition and age of the pipes, and the overall chemistry of the water supply — until safety and infrastructure are both protected.

The problems can arise not only in delivery, but also in the home itself, because even some modern fixtures can contain small amounts of lead.

"While one might assume that building a home to modern standards and codes would eliminate concerns with high lead in water, this is simply not the case," Edwards said. "The existing standards are insufficient — allowing up to eight percent lead by weight in some fixtures — and sometimes this creates significant problems that go undetected."

One example of a standard needing revision emerged from a study Edwards conducted in 2005 with his colleagues at Tech and the EPA. The researchers took a closer look at the American National Standards Institute/National Sanitation Foundation 61 Section 8 standard — a protocol that outlines specific testing methods and test-water formulas for evaluating plumbing safety.

The National Sanitation Foundation 61 Standard was developed for use by utilities, regulatory agencies and plumbing code organizations to assure that certified plumbing products do not contribute harmful levels of contaminants to drinking water.

The researchers tested brass fixtures purchased from a hardware store, along with a separate fixture composed entirely of lead, and subjected the systems to not only the Section 8 standard, but also careful and unique variations that the researchers had devised.

"The original performance safety standards were so lax, that the small plumbing device containing pure lead passed," Edwards said. "Since that time the tests have been made more rigorous."

More recently, Edwards and his colleagues have received an NSF grant to tackle the problem of lead in school drinking-water supplies. The effort stems from earlier work in Baltimore, Seattle and Washington D.C., where problems were so difficult and expensive to address, that in some cases, the most cost effective solution was providing students with bottled water.{{ video="LS_100226_drinking-water" title="How to Improve U.S. Water Quality" caption="Environmental engineer Marc Edwards, of Virginia Tech University, discusses ways to improve water quality in the United States, such as having more stringent safety regulations and better methods for detecting contaminants, including lead. Credit: NSF" }}

From the earlier studies, Edwards recognized that the program for reporting water quality from schools and day-care facilities — which is voluntary — is not working effectively.

There are three phases in the new research effort   which will involve Virginia Tech, the Children's National Medical Center, the Alliance for Healthy Homes, Parents for Non-toxic Alternatives, and a network of parents, students and teachers.

The first phase will look at how to improve water testing to catch lead that may be overlooked by conventional testing; the second will look at the bioavailability of the detected lead, determining whether it is likely to cause harm if children consume it; and the final phase will develop various models that officials and researchers can use to predict the level of risk to children posed by a given water source.

"This new research will fill many important knowledge gaps," Edwards said, "and give all stakeholders the information necessary to improve how problems resulting from lead in school water are handled."

Read more about Edwards’ work in the NSF press releases The Ones That Get Away and Your Tap Water: Will That Be Leaded or Unleaded?, and see him participate in the Water in 2025 panel, part of the Popular Mechanics-NSF Bridges to the Future webcast.