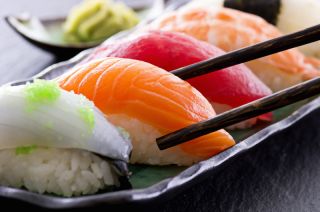 Eating the traditional Japanese diet may lead to a longer life, a new study finds.

Adults in Japan who closely followed that country's government-recommended dietary guidelines had a 15 percent lower risk of dying during a 15-year time period, as compared to people who didn't follow the guidelines, according to the new study.

In particular, those people who most closely followed the dietary guidelines were 22 percent less likely to die of stroke during the time period, according to the study, published today (March 22) in The BMJ.

Life expectancy in Japan is among the highest in the world, the researchers, led by Kayo Kurotani, a senior researcher at the National Center for Global Health and Medicine in Tokyo, wrote in the study. The the role the Japanese diet — which includes a high intake of fish and soybean products, and a low intake of fat — is of particular interest for research on life expectancy, the authors wrote.  [Extending Life: 7 Ways to Live Past 100]

Japan's dietary guidelines, presented as the "Japanese Food Guide Spinning Top," emphasize five types of dishes: grains, vegetables, fish and meats, milk, and fruits, the study said. The guidelines are represented by an inverted pyramid, with grains at the top, resembling a spinning top.

The study included data from more than 36,000 men and 42,000 women across Japan. All of them completed questionnaires about their health, including information on their food intake, at the beginning of the study, and then again at five- and 10-year follow-ups.

Using the results from the food-frequency questionnaire, the researchers calculated how closely the participants stuck to the dietary guidelines, according to the study. Those who followed the guidelines more closely had a 15-percent lower risk of dying during the follow-up period, compared with those who stuck to the guidelines less closely.

The overall lower rate of death in the group that followed the guidelines is likely due to the lower rates of death from cardiovascular disease, and in particular, stroke, the researchers wrote in the study. The people who ate a lot of vegetables and fruit, and ate enough fish and meat dishes, seemed to fare the best, the researchers said.

The researchers also noted that while fish and meat were considered together in one category in the study, Japanese people consume more fish and less beef and pork compared with Western populations.

"Our findings, together with previous reports, suggest that a dietary pattern of high intake of vegetables and fruits, and adequate intake of fish and meat, can significantly decrease the risk of mortality from cardiovascular disease in East Asian populations, particularly from [stroke]," the researchers wrote.