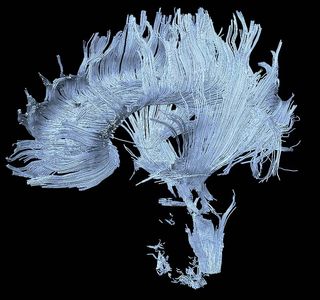 A brain-imaging method called diffusion MRI (magnetic resonance imaging) is relatively new to the field of neuroscience, though it shows promise as a diagnostic tool. Here, an image taken from the brain of a patient who suffered a stroke in the thalamus and midbrain, resulting in damage to certain axons (some are visible at the bottom of the image).
(Image: © Henning U. Voss and Nicholas D. Schiff, 2008.)

People who eat a diet slightly higher in protein tend to have a lower risk of stroke, according to a new study.

Scientists came to the conclusion after analyzing the results of several large trials that included more than 250,000 people. However, the findings show an association, not a cause-and-effect relationship. The researchers said they can't say whether a higher-protein diet may actually lower the risk of stroke, or whether some other underlying factor is tied to both.

Scientists disagree about what proportions of macronutrients — carbs, proteins and fats — in the diet may lead to optimal health. Some researchers argue that carb-heavy diets are responsible for surging rates of diabetes and obesity, while other studies suggest that high-protein diets raise the risk of cancer as much as smoking. And several lines of research point to fat-rich diets as a culprit in heart disease and stroke. [7 Ways to Raise Your Risk of Stroke]

To evaluate the role of protein in stroke risk, Dr. Xinfeng Liu, a neurologist at the Jinling Hospital in China, and colleagues looked at the published studies on stroke and protein consumption, and found seven that specifically looked at the risk of stroke. These studies were prospective, meaning that researchers started out by asking people about their dietary habits, and then followed them for a number of years and counted how many of the study participants had a stroke.

It's not clear how protein consumption might influence stroke risk. But "studies have shown that dietary protein may reduce stroke risk via its favorable effects on blood pressure. In addition to lowering blood pressure, the protein diet also significantly lowered triglycerides, total cholesterol, and non-HDL cholesterol," Liu told Live Science in an email.

Not all proteins were created equal, however. High fish consumption was linked with the lowest risk of stroke in the study, and past studies have tied high red-meat consumption to greater stroke risk, Liu said.

Diets high in vegetable protein seemed to be less protective against stroke than those that included a lot of animal protein. However, people in the studies who ate lots of animal-based proteins ate significantly more protein than those on a plant-based diet, which may have made it more difficult to detect the trend, the authors wrote in the paper.

In addition, it may not be the protein itself, but other elements that typically go along with a high-protein diet, that lead to the benefit.

"Dietary protein intake tends to be associated with other nutrients that may prevent stroke, such as potassium, magnesium and dietary fiber," the authors wrote.

The study was published today (June 11) in the journal Neurology.