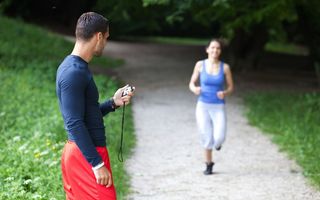 If you hate to exercise, you may benefit from a type of talk therapy that helps people accept negative feelings and uncomfortable sensations.

Several recent studies suggest that this therapy, called acceptance and commitment therapy (ACT), can boost people's physical activity levels and improve fitness in those who previously didn't exercise at all.

ACT teaches mindfulness, which means that it aims to make people more aware of their thoughts and feelings in the current moment. People learn how to accept uncomfortable physical sensations and metaphorically "make room" for these feelings in their bodies, according to a 2015 study of ACT in Australia. They also learn to question whether a thought (such as "Exercise is intolerable") might be getting in the way of their goals, and learn to see these thoughts for what they really are — just thoughts, as opposed to concrete facts.

People also learn to identify their core values and are encouraged to engage in behaviors that support these values. Identifying the value, or meaning, behind a behavior may help people commit to that behavior, said Emily Cox-Martin, an assistant professor of medicine and clinical psychologist at the University of Colorado's Anschutz Medical Campus who conducted a 10-week study of ACT on sedentary adults.

For example, if someone says they want to be stronger so they can play with their grandchild, "this indicates that being an active grandparent is important to them, and that value can then be connected to the behavior [exercise] in a way that facilitates its maintenance," Cox-Martin told Live Science.

Cox-Martin noted that ACT "isn't trying to change people's thoughts about exercise." Rather, "it helps someone understand what they value in life, and then how they can live a life consistent with those values," she said. [How to Start an Exercise Routine and Stick to It]

In Cox-Martin's study, which was published in October 2015, the researchers tested the ACT-therapy strategy with 24 previously sedentary adults. All of the participants were taking part in a fitness program that involved starting up an interval training program — exercising three times a week — and receiving ACT.

The researchers found that over 10 weeks, the participants completed almost all of the exercise sessions that they were asked to do (27 out of 30 sessions, on average). They also improved the time it took them to walk a mile by more than a minute, and increased their VO2 max, a measure of aerobic fitness level.

One limitation of that study was that there was no control group. In other words, the researchers did not compare the results of the group who received ACT with another group that did not receive ACT. However, the researchers said the study showed that it was feasible to use ACT to help people reach higher levels of physical activity.

The Australian study involved 59 adults who were doing only minimal amounts of physical activity. Researchers recruited them to participate in a 12-week program that aimed to get them to walk more. About half of the participants received a DVD that instructed them in ACT, while the other half didn't receive any training in ACT. At the end of the study, the participants in the ACT group were four times more likely to meet exercise guidelines in Australia (taking 3,000 steps in 30 minutes, five days a week) than people who didn't receive the ACT training.

"The discomfort associated with physical activity initiation can be a strong contributor to premature termination" of exercise, the researchers, from Australian Catholic University and the University of Adelaide wrote in the February 2015 issue of the British Journal of Health Psychology. "[ACT] allows the individual to tolerate discomfort, accept uncomfortable experiences, and facilitate progress towards goals."

However, more research is needed to determine whether the benefits of ACT seen in these early studies last over the long term, and whether the findings will hold in larger studies with more diverse populations.

In addition, studies will look into whether programs that teach ACT can be adopted on a wider scale, so that people may be able to learn these skills at home or through a smartphone app, rather than participate in a formal program.

"Acceptance and commitment therapy has already been used to help people change other health behaviors, like smoking cessation, using smartphone apps, and this would be a really interesting next step, especially given how widely used this technology is today," Cox-Martin said.