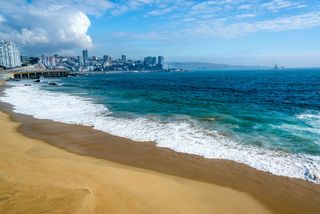 The Pacific coastline of Chile, near the city of Vina del Mar.
(Image: © Jess Kraft/Shutterstock.com)

The distance people live from the equator may influence their blood pressure, a new study suggests.

Researchers found that people in Chile who lived at greater distances from the equator had higher average blood-pressure levels compared with people who lived closer to 0 degrees latitude.

The study also found that the 37 percent of people in the country's southern latitudes (farther from the equator) had blood pressure high enough to diagnose the individuals with hypertension, whereas only 29 percent of those in the northern latitudes had hypertension. The findings were published online May 5 in the American Journal of Epidemiology.

The researchers said they studied Chile because it is the longest country in the world, running for about 2,640 miles (4,250 kilometers) from north to south, and because it has a homogeneous, or ethnically similar, population throughout its extent. This allowed the researchers to examine similar individuals over a wide range of latitudes. [5 Surprising Ways to be Heart Healthy]

The study demonstrated that subjects' blood pressure and the prevalence of hypertension is highest in the south of Chile, which is farthest from the equator, compared to the north of the country, which is nearer to the equator, said Dr. Charles Ferro, a kidney specialist at University Hospitals Birmingham in England, and the lead author of the study.

In the study, the researchers analyzed data collected from about 4,600 adults in Chile who had their blood pressure measured at their homes in the morning after an overnight fast, as part of a national health survey within the country. The researchers said they wanted to to evaluate whether blood pressure is affected by geographic latitude, solar radiation (a measure of the light and energy from the sun) and ambient temperature (outdoor temperature without factoring in variables, such as humidity or wind speed).

Just as location matters in real estate, it also seems to make a difference to blood pressure: The study found that the systolic blood pressure (the top or first number in a reading) of people living in southern latitudes in Chile was on average more than 5 millimeters of mercury (mmHg) higher than in people in northern locations, Ferro said.

And the rate of high blood pressure among people who resided in the south of the country was more than 8 percent higher than in the north, he said. [9 Healthy Habits You Can Do in 1 Minute (Or Less)]

There wasn't a clear relationship in the study between blood pressure and solar radiation or ambient temperature, the researchers said.

These are relatively small changes, which is why it takes a large distance, such as the extent of the whole country of Chile, to detect these subtle differences in a population, he said.

The reasons why latitude influences blood pressure, even to a small extent, are unclear, Ferro said. Other studies have suggested that people's salt intake, the number of daylight hours in their area, their sleep patterns and their levels of vitamin D all might play a role, the researchers said.

There is also increasing evidence that ultraviolet radiation directly lowers blood pressure, potentially by increasing the release of nitric oxide, a substance that may help widen blood vessels, Ferro said. Other possible explanations are that living near the equator could result in more active lifestyles or healthier diets, but the researchers tried to control for these factors in this study, he said.

But a better understanding of how the link may work could lead to insights into the condition of hypertension, and its causes.