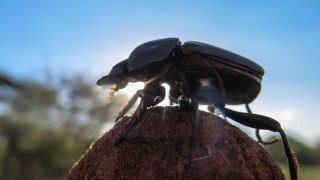 Humans have roads and infrastructure, GPS maps, and Siri to help them find their way, but creatures in the animal kingdom must rely on other tactics to navigate. For dung beetles, that means a dance and a mental photograph.

A new study finds that dung beetles take a snapshot of the positions of celestial bodies while "dancing" on top of a ball of dung. When they roll off with the ball, the beetles are able to travel in a straight line, the scientists said.

"In a way, you could say that the dance has a function like a trigger on a camera: At some moment during the dance, this trigger is pushed and a picture of the celestial visual scenery is taken and stored somewhere in the brain," study lead author Basil el Jundi, a researcher in the Department of Biology at Lund University in Sweden, told Live Science.

This snapshot can include information like the placements of the sun and moon, and the alignment of the stars. Dung beetles, despite their tiny brains, can capture this information, which allows them to travel in straight lines, the researchers said.

Though other animals can use a variety of clues in their navigation — from geographic features to sound waves — it appears that dung beetles rely solely on these snapshots, the scientists said.

"As we knew that many other insects use terrestrial cues for navigation, we extensively tested this in dung beetles over the last years, but they always failed to use these cues — even if the sky was not visible," el Jundi said. "We do not know whether the beetles can use other cues, such as wind signals, but according to our current knowledge, the sky is the only source of visual reference, and the 'celestial snapshot' strategy is the only technique they seem to use."

El Jundi said it is possible that the dung beetle's internal navigation system could be applied to the technology for driverless vehicles.

"The focus of our work is mainly to understand how animals navigate safely through their environment and how the internal compass controls the orientation behavior," el Jundi said. "Our results give us deep insights in to the compass system of an orientating animal and might help to design autonomous vehicles that are able to precisely navigate in a certain direction."