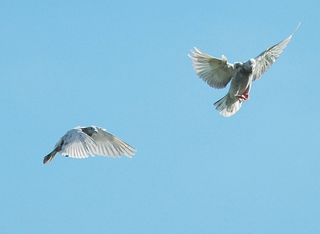 Two homing pigeons setting off together on the journey back to the loft.
(Image: © Robin Freeman)

The mystery of how homing pigeons are able to navigate home may have been solved. The birds use low-frequency sound waves to make a mental map of their location, new research suggests.

The findings, published today (Jan. 30) in the Journal of Experimental Biology, may shed light on why the normally amazing navigators sometimes get completely lost: the low-frequency waves from their current location don't reach their home loft.

In 1969, a Cornell biology professor gave a talk to geologists at the school about the mystery of the lost homing pigeons. If the pigeons were taken to almost any locations, they headed straight home with amazing accuracy. But at one location, called Jersey Hill, the pigeons got completely lost, with each taking off in a random direction. At two other locations, the birds consistently headed in the same wrong direction. On a few trips, the birds would miraculously make it home, but then get lost the next day. [The 10 Weirdest Animal Discoveries]

United States Geological Survey geologist John Hagstrum heard the talk, and the question nagged at him for years. In the 1990s, he discovered that birds in European pigeon races were going astray on clear-weather days, when the Concord, the supersonic plane, was in the area. That led him to wonder whether the sonic boom from the Concorde plane disrupted pigeon navigation by interfering with the sound waves.

Prior research had shown that birds hear incredibly low-frequency sound waves of about 0.1 Hertz, or a tenth of a cycle per second. These infrasound waves may emanate from in the ocean and create tiny disturbances in the atmosphere. Hagstrum began to think the birds used infrasound for navigation.

"If that sound in the Earth is coupling through the topography, then maybe the birds are actually sort of seeing, or imaging, their topography around their loft acoustically," he told LiveScience.

To test the idea that pigeons use infrasound to make an acoustic map of home, he used a computer program to model the emanation of infrasound waves from 200 sites around Cornell University where about 45,000 pigeons had been released over a 14-year period. He then compared sound wave location data with information on whether the pigeons had made it home.

The explanation may solve other mysteries about pigeons — for instance, why they circle around before heading off in one direction. Because the sound waves are so long, but the birds' ear canals are tiny, they need to circle to reconstruct the wave and figure out which way they are oriented, he said.

"It's a very interesting and provocative idea," said Charles Walcott, a neurobiologist at Cornell University, who was not involved in the study.

While the findings are very convincing, Walcott told LiveScience, the ultimate test will be to set the birds loose in new locations where infrasound from their home loft doesn't reach, and see if they still get lost.