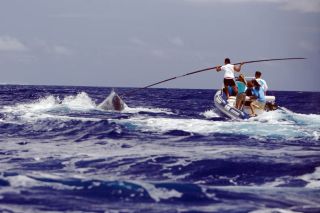 The Cook Islands whale research team tags a humpback whale as it surfaces off the island of Rarotonga. The whales are being tagged as part of "The Great Whale Trail." The project is a collaboration between Greenpeace and Nan Hauser, who studies humpback whales in the Cook Islands.
(Image: © Greenpeace/Paul Hilton)

The giants that migrate farther than any other mammal on Earth, humpback whales, do so with mysterious, extraordinary accuracy, veering off course by less than 1 degree over hundreds of miles, scientists find.

Humpback whales (Megaptera novaeangliae) regularly swim roughly 3,000 miles (5,000 kilometers) between breeding and feeding grounds. However, a record-setting female humpback was recently discovered traveling from Brazil to Madagascar, a voyage of at least 6,090 miles (9,800 km) — the longest documented migration by any mammal ever.

To learn more about these remarkable migrations, scientists embedded radio tags in the skin and blubber of 16 humpbacks and used satellites to track them from 2003 to 2010. (The tags, about 8 to 12 inches long — 20 to 30 centimeters — were designed to fall off their bodies over time.) [Images of whales being tagged]

"The Brazil and New Caledonia whales were clearly migrating away from low-latitude calving grounds towards high-latitude feeding grounds," said researcher Travis Horton, an environmental scientist at the University of Canterbury in New Zealand. "The movements of the Rarotonga whales are anomalous and remain difficult to explain, as we would expect them to be moving in an overall southerly direction by late winter."

The whales each traveled distances of at least 120 miles (200 km). They moved in astonishingly straight lines, with most straying off course by 1 degree or less. The humpback that swam the most, a 28-day voyage of 1,386 miles (2,232 km), veered just 0.4 degrees off.

It remains a mystery how these whales are capable of such exceptional precision. For instance, buoys along their routes showed that highly variable sea currents were capable of significantly deflecting their headings.

In the case of the humpback whales, however, magnetic cues by themselves might not help, as the Earth's magnetic field varied widely along each whale's voyage, with magnetic north changing by as much as 12 percent and as little as 0.5 percent across these journeys. Similarly, the sun alone could not explain the whales' success. Humpbacks from the same area were found to follow similar headings despite seeing the sun in different positions in the sky, and they also followed different headings despite seeing the sun in similar positions.

"Although we saw no clear relationship between solar and magnetic directional cues and whale headings, it is entirely possible that they are using both the sun and magnetic field in a coupled system of orientation," Horton said.

The scientists detailed their findings online April 20 in the journal Biology Letters.

"We have a reasonable handle now on what they are doing, but very little information on how they are doing it," Horton told Live Science. "As more data becomes available, we will transition from 'what they're doing' studies to more process-oriented 'how they're doing it' interpretations."