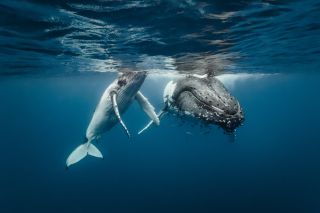 A humpback whale and its calf.
(Image: © Shutterstock)

Lots of baby humpback whales may be on their way, if recent years are any indication.

An unusually high number of female humpbacks living in the Southern Ocean around the Western Antarctic Peninsula have gotten pregnant in recent years, according to a study published today (May 2) in the journal Royal Society Open Science. Researchers are hopeful that the population is recovering from years of commercial whaling that nearly wiped them out in the area in the 20th century.

Humpback whales usually give birth every couple of years and have pregnancies that last for around 11 months, according to the National Oceanic and Atmospheric Administration. Once the baby is born, the mother is very "protective" and "affectionate" toward its young, according to NOAA.

Pregnant or not, humpback whales were easy targets for whalers because of their abundance in bays and their tendency to float when killed, according to the study. With treaties put in place in the late 20th century, whaling stopped, and populations slowly began to recover. Now, humpback whales in the Southern Ocean around Antarctica are not considered endangered, according to The New York Times.

The researchers collected skin and blubber samples between 2010 and 2016 from 268 unsuspecting females. They tested the samples for progesterone — a hormone that regulates the reproductive system and pregnancy in most mammals, including humans. If the progesterone levels matched those found previously in pregnant female humpbacks, the researchers could indicate if these giants were "expecting."

They found that pregnancy rates varied greatly from year to year, from 36 percent in 2010 to 86 percent in 2014. But across all the tissue samples, on average, 63.5 percent of the females were pregnant. This is up from 48 percent of pregnant females identified between 1950 and 1956 in Antarctic whaling areas, according to the study.

But this good news could be short-lived, according to The New York Times.

The Western Antarctic Peninsula has increased in air temperature by nearly 12.6 degrees Fahrenheit (nearly 7 degrees Celsius) since the 1950s, according to the paper. Warmer air means more melting of the sea ice covering the Southern Ocean. This region has seen one of the greatest effects of climate change regarding warming. And while at first this might be helping the whales, providing them with 80 more days of hunting before the sea ice begins to cover their habitat, the good times most likely won't last, according to the researchers.

The whales may expand into more areas that were previously covered with ice, and "prey availability will likely increase," the researchers wrote, referring to the little crustaceans called krill that make up the bulk of humpbacks' diet. "Long-term trends, however, may be more problematic." According to The New York Times article, a reduction in sea ice can endanger the krill.