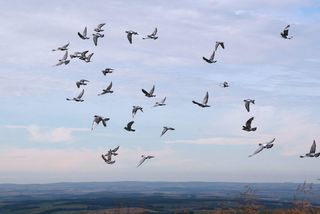 A flock of homing pigeons released and tasked with finding their way home. Scientists aren't sure why some of these racing pigeons disappear in what has been dubbed Birdmuda Triangle.
(Image: © Gail Johnson, Shutterstock)

Hundreds of racing pigeons have been disappearing over a sleepy pocket of North East England, earning the region a reputation as the "Birdmuda Triangle."

On Saturday (Aug. 25), the Telegraph reported, one club of pigeon fanciers released a flock of 230 birds from North Yorkshire. Only 13 birds arrived at their destination in Scotland.

Some of the aggrieved hobbyists — who routinely release trained pigeons tasked with finding their way home from distances of hundreds of miles — are now considering grounding their remaining birds until the mystery is solved.

Pigeons have long baffled scientists with their uncanny navigational abilities. Earlier this year, researchers at Baylor College identified one component of the birds' internal GPS when they showed that their brains contain a specialized group of cells that measure the strength and direction of the Earth's magnetic field, serving as a compass.  [9 Weird Animal Facts]

But what special property of a triangular region in North East England — marked off by places called Wetherby, Corsett and Thirsk, and measuring 65 miles (105 km) on its longest side — could be capable of short-circuiting a pigeon's sense of home?

Some racers have implicated a nearby military intelligence operation, blaming rogue signals from the Royal Air Force's Menwith Hill satellite station for jamming their birds' instincts.

"There's been a fair amount of experimentation on the effect of radio signals on pigeon orientation," said Charles Walcott, a professor of neurobiology and behavior at Cornell University who has been studying pigeons since 1962. "No one has ever seen any substantial effect."

Others have attributed losses to unusually high levels of solar activity that they say have distorted the Earth's magnetic field and, by extension, their pigeons' mental maps. (Though it is merely following its normal cycle, the sun has been increasingly active lately.)

According to Walcott, researchers have shown that disruptions in the Earth's magnetic field caused by solar flares do in fact jog pigeons' internal compasses, changing the initial direction the birds choose to set off in when they're first released. But a nationwide study published in the now-defunct Racing Pigeon Bulletin examined the results of pigeon races alongside variations in the Earth's magnetic field and concluded that, in the United States at least, there was no correlation.

"But [the Racing Pigeon Bulletin study] doesn't rule out the idea," he told Life's Little Mysteries. "It just says that over a big area there was no obvious effect; it doesn't mean that there couldn't be one in a small area."

Walcott's pick for the most plausible cause of England's pigeon losses happens also to be the most likely explanation for the real Bermuda Triangle's undue reputation as a mystical devourer of ships and men: bad weather.

The Telegraph reports that the section of North East England in question has been experiencing abnormally high rainfall, and some of the racers have proposed that missing pigeons may have been led far afield by their efforts to avoid storms.

"I think that explanation's quite likely," said Walcott. "Pigeons really do not like to fly in the rain because their feathers are not equipped for it, so in my experience pigeons will simply put down until the rain has passed."

As for where last weekend's 217 unaccounted-for racing birds headed when the sun came back out, Walcott says we may never know. He's heard of mass disappearances at U.S. races before, and for some of the pigeon fanciers at those events, answers still haven't surfaced.

"[T]hose pigeons that are lost, many of them find other pigeon lofts and go in. But some just plain disappear and you never see them again, and I don't think anyone understands what's going on," he said.