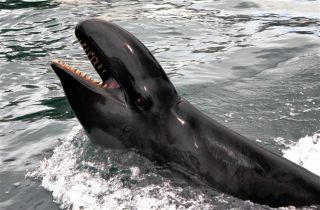 Like their dolphin cousins, false killer whales can "see" underwater using echolocation to bounce sound off of objects. Now, a new study finds that the animals can actually focus their echolocation on their target much like humans can focus their vision on objects near and far.

"It makes sense that they would have this focusing mechanism, because they would have to be constantly changing their echolocation" to find prey, said study researcher Laura Kloepper, a doctoral candidate at the University of Hawaii. But although researchers had suspected this ability, no one had ever proven that it was happening.

To do so, Kloepper and her colleagues recruited the help of a captive false killer whale named Kina. False killer whales are cetaceans, a group that includes dolphins and the similarly named killer whale, or orca.

Kina is a 20-year veteran of echolocation research, trained to communicate with her trainers when she can tell a difference in the size or shape of experimental objects in her environment.

In the newest study, published today (March 22) in the Journal of Experimental Biology, Kina swam into a hoop and waited for researchers to lift an acoustic barrier between her and her experimental targets — a series of hollow cylinders. Kina has been trained to back out of the hoop and tap a paddle in her pen when she detects a cylinder of a certain size and thickness. If the cylinder is any other size, she stays put. [10 Creative Creatures]

Kina couldn't see which cylinder the researchers had lowered into the water, so she had to echolocate to gauge its size. As she did so, the researchers recorded her echolocation clicks with underwater microphones. They were then able to reconstruct the shape of the sound-wave beam coming from Kina using computer software.

By any measure, Kina's detection abilities are "amazing," Kloepper told LiveScience. From 26 feet (8 meters) away, she can detect the difference between two objects that differ in width by the length of a human hair.

In one early experiment with Kina, the machinist who made the metal cylinders made a tiny error, said Paul Nachtigall, Kloepper's doctoral advisor. None of the humans involved could tell, but Kina knew.

What the new study revealed, however, was that Kina is capable of focusing her clicks on an object. When her target was farther away or more difficult to differentiate its shape and size, the false killer whale changed the shape of her echolocation beam so that it would be more narrowly focused on the object. [See video of the experiment]

The ability is not unlike how the human eye works to focus, only with sound instead of light.

This ability arises from a specialized organ called the melon, Kloepper said. The melon is situated above the eyes and is what makes false killer whale and dolphin foreheads bulge. By forcing air through the melon, false killer whales create their echolocation clicks. Musculature around the organ probably also contributes to the focusing ability.

Nachtigall says it's likely the whales focus automatically, given the sorts of high-speed, dimly lit underwater chases that are required to catch prey. Yet-to-be published follow-up research on harbor porpoises suggests that they can focus their echolocation, too, Kloepper said.

"This gives us a bigger idea of exactly what is going on underwater between the predator and the prey," she said.