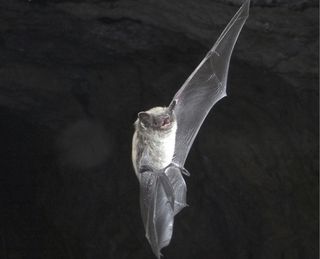 By sending out high-frequency calls and analyzing the echoes that come back, bats can essentially "see" the world around them. Scientists have long thought that bats judge the size of a nearby object based on the strength of this echo, but a new study shows that echo intensity alone does not paint the whole picture.

What's really important to the bats, the study suggests, is an echo parameter called sonar aperture — the spread of angles from which echoes impinge on the bats' ears, with a larger spread indicating a larger object. "The sonar aperture directly correlates with the size of real objects," Holger Goerlitz, a researcher at the University of Bristol in the U.K., said in a statement. Goerlitz is the lead author of the new study published Nov. 24 in the journal Behavioral Processes.

For the study, Goerlitz and his team set out to investigate how bats' flight patterns change when faced with real and virtual objects in their paths. When a bat emits an echolocation call, the sounds that bounce back carry a wealth of information about the environment. One could imagine, however, that a noisy area could make it difficult for a bat's brain to process individual environmental features, similar to the way a bright light source blinds humans to objects near that light.

To test this idea, the researchers set up an experiment near the Tamana Cave in the West Indies, which houses thousands of bats of up to 13 species. They placed a small loudspeaker, about 2 inches by 3 inches (5 by 8 centimeters) in size, in front of the cave and took video of the bats' flight patterns as the animals emerged from their roost at night.

They found that despite the cacophony of calls and echoes, the bats were still able to identify and avoid hitting the loudspeaker.

But how did the bats figure out the speaker's size? The long-standing notion is that bats gauge objects' sizes by analyzing the intensity of the sounds that bounce off of them — large objects have a stronger echo, because they reflect more of the bats' calls.

The researchers placed a microphone about 5 to 10 feet (1.5 to 3 meters) in front of the loudspeaker. When the bats called out, the microphone recorded the call and fed it into a nearby computer. The computer generated a copy of the recorded call and manipulated it to represent a loudspeaker 10 times the size of the real thing. After a short delay, the "echo" was spit out of the real loudspeaker, making it appear as if the large, virtual object lay somewhere between the microphone and loudspeaker.

Another recent study published Oct. 26 in the Journal of Neuroscience also showed that sonar aperture is a reliable cue for object size in bat sonar. Rather than having bats try to avoid an object, the scientists set up a loudspeaker array and trained stationary bats to choose the larger of two virtual objects. They found that increasing the sonar aperture (by using more loudspeakers) made a bigger difference to the bats than increasing the echo intensity.