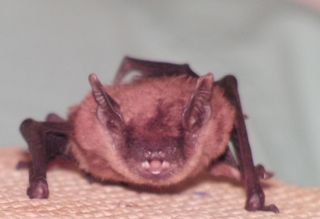 Bats use echolocation to hone in on specific targets, while at the same time avoid colliding with objects.
(Image: © Gwen Morgan)

How does a bat focus in the act of capturing prey, while at the same time avoiding obstacles in its path?

New research partially funded by the National Science Foundation, shows how bats interpret their surroundings. Postdoctoral fellow Mary Bates and neuroscientist James Simmons, both of Brown University, are studying how bats use echolocation to hone in on specific targets, while at the same time avoid colliding with background clutter.

When bats echolocate they are able to create a mental picture using sound which is reflected back to them. The returned echoes allow them to detect and capture prey, avoid obstacles and navigate through complex surroundings. [Flying Mammals: Gallery of Spooky Bats]

When a bat emits high frequency chirps, it waits for a corresponding echo from the emitted sound. If the echo matches the broadcast echo they emitted, then they are able to see the details of the landscape in front of them. What they discovered is bats are extremely sensitive to small differences with returning echoes.

"They admit high-energy, high-frequency sounds and listen to the echoes off of the objects in front of them. From the echoes they can tell how far away something is, based on the delay it takes for the echo to return. They can tell how fast it is moving, about what size, even possibly what material it is — they have extremely sophisticated echolocation abilities," Bates said.

Bats prioritize objects based on the different harmonics with the return echoes, which Bates and Simmons refer to as "auditory fingerprints." From an auditory fingerprint they are able to sort and separate targets from clutter based on different parts of the broadcast echo at 1.5 decibels, as well as the delay of sound. This allows a bat to hone in on its target while taking note of surrounding objects in their path.

"The bat takes clutter and defocuses it, like a camera would, so the target remains highly defined and in focus," Simmons said.

Apart from creating mental pictures of their environment through echolocation, another unique capability is how bats are able to distinguish their own echoes from those of other bats. The answer lies in their neurons, which are tuned to a particular frequency of the bats echolocation band. Each bat will use a different frequency and harmonic pair to echolocate.

"That is how a bat tells its own echo-similar pair from another similar echo pair, which are coming from other bats all echo-locating and looking for insects in a small area. If they have this very precise template matching process in the brain, then the sound of another bat — even if it differs slightly in frequency or in the sweep of the sound — things like that are going to make a huge difference to the bat," said Bates.

This unique ability to filter out extraneous echoes and hone in on prey using its own bio-sonar is one aspect that sets bats apart from other mammals. Researching their unique abilities may lead to innovative discoveries and projects that could assist us in the future, including understanding our own hearing abilities.