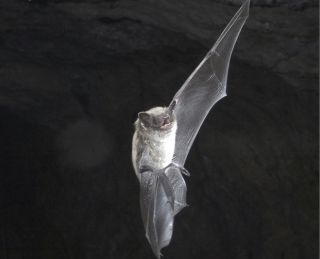 Want to know what bats eat? Just remember — what goes in must come out.

That's the principle used by researchers from the University of Bristol in the U.K. and the Biodiversity Institute of Ontario, Canada. The scientists wanted to know which insects top the list of bats' favorite food. So they collected four months' worth of bat poop (also known as guano) from roosts in Southern Ontario. A genetic analysis of insect DNA extracted from the guano reveals that the flying mammals like eating insects from aquatic environments.

"This technology is very new," study author Elizabeth Clare of the University of Bristol said in a statement. "It gives us an entirely new insight into the bats' behavior. Instead of finding they ate a moth or a mayfly, we now know exactly what species of insect it was."

"It's a very noninvasive way of tracking their behavior," Clare added. "A bit like looking through someone's rubbish bin to see where they shop."

The bats studied were Myotis lucifugus — or little brown bats — which are currently threatened by a deadly fungus called white-nose syndrome. The fungus powders the noses of bats as they hibernate, waking them from their slumber and evidently depleting their energy stores, ultimately killing them.

In the current study, published March 3 in the journal Molecular Ecology, researchers wanted to know more about the environment supporting these threatened bats. They extracted insect DNA from guano collected between May and August at three bat roosts. They then matched small regions of the extracted DNA to databases of known insect DNA to identify the species that make up bat meals.

They found that bats target insects that live near rivers, streams and ponds. They are locavores, traveling just a few hundred meters to catch their prey. The bats also eat seasonally, changing their diet based on insects available and depending on the bats' own phases of pregnancy and lactation.

Bats living in agricultural habitats had a narrower diet than those living in a wildlife conservation area, despite the fact that water quality in both areas was good.

"This suggests that even small conservation projects can have an impact on the entire food chain," Clare said. "This site has a small patch of forest, a small pond and a dedicated group of conservation workers. All these components seem to have generated a good environment for the insects and thus the bats they support."