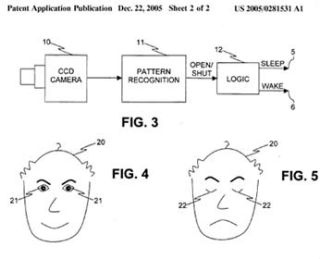 Lucent's drawing to describe a DVR that would sense when the viewer falls asleep.

Lucent scientists have filed a patent application for a digital video recorder (DVR) that will detect when the user has fallen asleep—and will then turn off the DVR. As it turns out, Robert Heinlein had thought about this forty-five years ago.

Alternatively, the "sleep detector" may be a device wearable by the user to monitor their physical activity or physiological status. This wearable device could include one or more of the following: an accelerometer, a heat flux sensor, a galvanic skin response sensor, a skin temperature sensor and a near-body ambient temperature sensor.

In his 1961 novel Stranger in a Strange Land, Robert Heinlein mentioned a similar device, used by people who read in bed. The pages of the book "spool" were projected on the ceiling —but what happened if the user fell asleep?

If you are interested in other science fictional sleep aids made real, take a look at the Yumemi Kobo Dream Factory and the Metronap sleep pod. Read more details here.