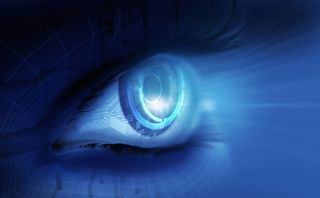 An artist's concept of a bionic eye.
(Image: © Andrey VP/Shutterstock.com)

It may sound like something out of "Star Trek": Doctors have implanted a device in patients that has restored some central vision after advanced eye disease left those individuals with only limited peripheral vision. This is the first time that artificial and natural vision has ever been integrated in humans, the U.K.-based research team said.

The study was small and preliminary, involving only four patients with age-related macular degeneration (AMD). The research team reported that the implant enabled the patients to recognize the outline of faces and some facial characteristics, such as whether the mouth was open or closed — ordinary details of life that had long been lost to these patients, as AMD slowly robbed them of their vision.

The research was presented this week (May 3) at the annual meeting of the Association for Research in Vision and Ophthalmology (ARVO) in Seattle, Washington. [5 Experts Answer: What's the Best Way to Preserve My Eyesight?]

AMD, as the name implies, is a deterioration of the eye's macula, a small area in the back of the eye that allows you to see fine details clearly. AMD does not lead to complete blindness, but rather to the gradual loss of central vision that can interfere with everyday activities, such as the ability to see faces, read or do close work, such as cooking. The remaining peripheral vision doesn't provide the acuity for such activities.

AMD is the leading cause of vision loss in the United States, according to the Centers for Disease Control and Prevention. More than 2 million Americans have AMD — a number that's expected to more than double by 2050, according to government data. AMD is most common among people over age 65. The cause is unknown, but people's risk of being stricken by the condition is heavily influenced by smoking and genetics.

Doctors have been successful in slowing the advance of AMD through a dietary supplement regimen comprising vitamin C, beta-carotene and other nutrients. Injections of prescription drugs are also used to treat certain kinds of advanced AMD. However, no treatment can reverse the loss of vision.

To restore central vision in four patients with advanced AMD, doctors implanted into their eyes a device called the Argus II electronic epiretinal prosthesis. This is a new commercial product that, in earlier incarnations, has restored very limited sight to people who had only perception-of-light vision as a result of a rare, degenerative eye disease. The device is essentially a miniature camera attached to the back of the eye that captures images and sends electrical signals to the brain. [The 7 Biggest Mysteries of the Human Body]

None of the patients reported "confusion" about what they were seeing when the device was turned on. This was a concern for the researchers, because the brain was receiving a combination of natural electrical impulses from the peripheral areas of the eye as well as artificial impulses from the central implant, and they didn't know how the brain would interpret this.

Another element of success was that the implant didn't seem to cause problems in the patients' bodies; they tolerated them for up to six months, with no signs of infection.

The researchers wrote that, while previous implants have helped people with rare diseases, the latest research results may "indicate a new way of restoring central vision in one of the most common causes of severe loss of central vision in people over the age of 50, dry age-related macular degeneration … for which no other treatments are currently available."

The research team comprised doctors and engineers from the University of Manchester in England and the company that makes the implant, Second Sight Medical Products in Sylmar, California.