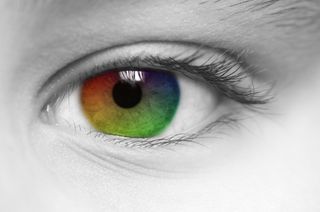 Blindness is a somewhat elastic term used to describe a wide range of visual limitations.

The functionally blind, for example, can see a little, but not well enough to get by without significantly altering their lives, such as by reading braille or listening to books on tape. Legal blindness is defined as falling short of a statutory standard of visual acuity: 20/200 vision in most of the United States, or 6/60 in Europe.

All of these disorders permit some level of sight or light perception. Total blindness, sometimes termed NLP for “no light perception,” is reserved for those who lack even these limited abilities; in fact, they see nothing at all. Nevertheless, recent research has revealed that, at least in some cases, even the totally blind might be able to perceive light nonvisually.

It all began with research in mice. Back in 1923, Harvard grad student Clyde Keeler discovered that the mice he was breeding for research had experienced a mutation that caused their eyes to lack photoreceptors – light-sensing cells located in the retina. This came as a bit of a shock, because the rodents, which should have been totally blind, reacted to light: Not only did their pupils shrink, but their bodies maintained circadian rhythms – the built-in body clocks, triggered in part by cycles of light and dark, that regulate sleep and eating.

The traditional visual model says that we perceive the world through two types of retinal photoreceptors: rods, which do well with conditions of low light, and cones, which excel at perceiving fine detail and color.

Wondering how his mice could “see” without either, Keeler concluded there must be another, as-yet-undiscovered photoreceptor. His suggestion was so contrary to prevailing thought that eight decades passed before someone investigated his findings and proved him right.

It turns out that mouse eyes, and human eyes as well, contain a kind of cell that detects light without contributing to vision. These cells, called intrinsically photosensitive retinal ganglion cells (ipRGCs), are not found on the retina proper, but on the layer of nerves that transmits signals from rods and cones to the brain.

Unlike signals from rods and cones, which end up in the image-processing area of our gray matter, the messages from ipRGCs are distributed to several parts of the brain. One of these destination regions is associated with sleep; another is believed to be related to seasonal affective disorder; and still another could help explain why light causes some migraine sufferers such discomfort.

It may sound strange but, after all, what we think of as vision is no more than a collage selectively assembled by our brains from piecemeal data. Some is kept, some is thrown away, and some is simply interpolated. In other words, your brain sees both more, and less, than you do – a fact to which most of us remain blind.