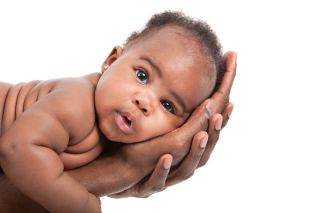 It's a good thing babies are so adorable, because they need years of looking after before they can survive on their own.
(Image: © Flashon Studio)

Some animals come into this world more self-sufficient than others.

Many can fend for themselves without any parental supervision almost immediately — picture baby sea turtles hatching on the sand and then somehow finding their way to the ocean.

Other animals, like newborn giraffe calves, are able to clamber upright and walk around on their own within hours of birth. [In Photos: How Babies Learn]

Human babies, however, are a different story.

For the first two months of life, they can't lift their heads without help. They usually roll over for the first time at about 4 months, and sit up at around 6 months. They usually start standing at about 9 months, and take their first tentative steps at around 1 year old, according to infant developmental milestones compiled by the Centers for Disease Control and Prevention (CDC).

But even then, babies are just getting started. Fine-tuning the most basic survival skills, such as walking and feeding themselves, takes at least another year or more, and the little ones generally remain dependent on parents or caregivers for well over a decade before they're even able to begin to navigate parts of the world on their own.

And that's OK, experts say. The extra time that humans need to acquire these abilities is part of the evolutionary trade-off for having highly developed brains capable of managing complex reasoning, communication and social interaction, alongside the physical requirements and capabilities of our adult bodies.

When animals produce self-sufficient young, it's for a number of reasons related to both biology and behavior, according to John Dumbacher, a curator of ornithology and mammalogy at the California Academy of Sciences. [The 10 Wildest Pregnancies in the Animal Kingdom]

Some animals need their young to be mobile as quickly as possible — in water or on land — because adults are constantly on the move and the young need to keep up (or keep away from predators). Other species that don't roam as widely hunker down with helpless young in their nests or burrows.

And there can be a lot of variation among animals from the same group.

Take birds, for example. "Songbirds — robins, bluebirds — those tend to be born more or less naked, with their eyes closed, and they can't do much more than lifting up their heads and getting a meal from their parents," Dumbacher told Live Science.

Newly hatched chickens, on the other hand, are much more capable of taking care of themselves. "They have downy feathers; they can walk around; they can peck at the ground," Dumbacher said. And ducks, he added, can hop into the water shortly after hatching and swim after their mother.

The variety and the hatchling's ability can be partly explained by the size of the adult bird, Dumbacher said, which translates into the maximum size of the egg it can lay. Bigger-bodied ducks, chickens and geese can lay larger eggs that hold more nutrients, so an embryo can spend more time developing inside. Songbird eggs are already as large as they can be relative to the parents' body size, so their young are born in a less-developed state and require more time under the parents' wings, Dumbacher added. [That's Incredible! 9 Brainy Baby Abilities]

There is similar variability in mammals, Dumbacher said. Although all mammal newborns are dependent on their mothers for nutrition, some are more physically capable as newborns than others.

Foals can stand up and walk independently soon after birth because adult female horses are big enough, and can gestate long enough, for their young to develop substantially before birth, making them more physically capable even as newborns, Dumbacher explained.

However, shrews — like songbirds — are born nearly naked and with closed eyes, and must be kept warm by a nest and their mother's body heat.

"With its high metabolic rate and a small body size, it's hard for something like a shrew to carry a baby for a long period of time," Dumbacher said.

Physical and metabolic limitations also apply to human gestation and birth, according to a study published in 2012. [Why Pregnancy Really Lasts 9 Months]

It was already known that the brains — and skulls — of developing babies can't grow bigger than they do in the womb (on average) because they wouldn't fit through the mother's pelvis. The study found that a nine-month gestation period (again, on average) is likely the longest that a woman could safely sustain the accelerated metabolic rate required during pregnancy.

But self-sufficiency of mammal newborns is dependent on more than a species' size and metabolic rate, Dumbacher added. "It's also determined by the ecology of the species, and how much of their behavior can be coded in instinct versus how much has to be learned from their parents," he said.

In other words, the more information about behavior that a juvenile has to absorb from adults of its own kind, the more important the role of long-term parental care is in integrating a young newcomer into the patterns and practices of the group.

That starts to explain the long road that a human baby must travel from helpless newborn, to child, to adult, considering how much they need to learn from their parents about communication and social behavior.

The lengthy development process that humans experience is "a luxury," said Marianella Casasola, an associate professor in the Department of Human Development at Cornell University. And it extends even later in life than experts once thought.

"There's a lot of development that goes on in the prefrontal cortex [of the brain] even into early adulthood," Casasola told Live Science.

Though it may seem like humans' early physical capabilities lag behind those of other animals as newborns, in the long run, humans' lengthy period of relative helplessness eventually delivers a substantial cognitive payoff.

"We know that things evolve in a certain way because there's an advantage to it," Casasola told Live Science. "The longer maturation rate allows us to develop much more complex thinking."