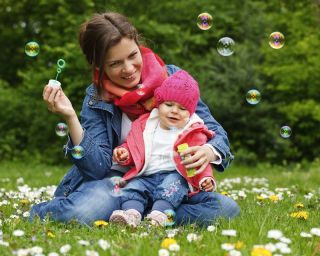 A mother and her baby blow bubbles.
(Image: © S.Borisov, Shutterstock)

While his mother is cooing "Does baybee want his bahbah?" that 6- to 9-month-old infant may just be thinking something along the lines of "Yes, I do want my bottle!" New research indicates that infants as young as 6 months can understand the meaning of many spoken words.

"Kids at this age aren't saying anything, they're not pointing, they're not walking," study researcher Erika Bergelson, of the University of Pennsylvania, said in a statement. "But actually, under the surface, they're trying to put together the things in the world with the words that go with them."

This is the first demonstration that children of this age can understand such words. "There had been a few demonstrations of understanding before, involving words like 'mommy' and 'daddy'," study researcher Daniel Swingley, of the University of Pennsylvania, said in a statement. "Our study is different in looking at more generic words, words that refer to categories," like apple or mouth, which come in different shapes and sizes.

Previously, researchers believed that between 6 and 9 months of age, infants were able to understand only elements of their native language — and so they would react to individual sounds — but weren't able to take in the meaning of whole words. Most psychologists believe children start understanding words around their first birthday.

Typically, infants don't speak in words or even gesture meaningfully before 10 or 11 months. To test out this belief, the researchers brought 33 6- to 9-month-old infants into the lab and compared them with 10- to-20-month-olds when performing two tests.

The infant and caregiver sat in front of a screen showing four pictures, two of one food item and two of one body part; for instance, an apple and a hand. (This was repeated with eight different foods and body parts.) The caregiver, while blindfolded so as to not influence the baby's gaze, repeated simple phrases such as "Where's the apple?" In another part of the study, babies were shown one complex image, and they were asked to find a particular part of the image, such as the arm on a whole body or the banana on a tabletop that held other items.

In both the four-picture and complex-image tests, the researchers found that the 6- to 9-month-old babies fixed their gaze more on the picture that was named than on the other images or other items in the picture, suggesting they understood the word was associated with the object. This word understanding seems to remain relatively unchanged until about 14 months, when it jumps dramatically, the study showed.

"I think this study presents a great message to parents: You can talk to your babies, and they're going to understand a bit of what you're saying," Swingley said. "They're not going to give us back witty repartee, but they understand some of it. And the more they know, the more they can build on what they know."

The study was published Monday (Feb. 13) in the journal Proceedings of the National Academy of Sciences.