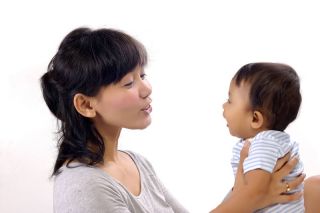 Children use grammar to help them understand the meaning of new words, the study shows.

Children are able to comprehend complex grammar at a younger age than previously believed, a new study shows.

When learning a language, young children must understand the meaning of words as well as how to combine them into a sentence to communicate meaning. Many 2-year-olds rarely combine more than two words together, saying "more juice," for instance, but not yet forming full sentences.

However, new research suggests that even before 2-year-olds speak in full sentences, they are able to understand grammatical construction and use it to make sense of what they hear.

"Studies have suggested that children between the ages of 2 and 3 start to build their understanding of grammar gradually from watching and listening to people," study researcher Caroline Rowland of the University of Liverpool's Child Language Study Center said in a statement. "More recent research, however, has suggested that even at 21 months, infants are sensitive to the different meanings produced by particular grammatical construction, even if they can't articulate words properly."

Rowland and her colleagues showed a group of 2-year-olds pictures of a cartoon rabbit and duck and asked each toddler to match the illustrations to sentences containing made-up verbs.

"One picture was the rabbit acting on the duck, lifting the duck's leg, for example, and the other was an image of the animals acting independently, such as swinging a leg," Rowland said. "We then played sentences with made-up verbs — the rabbit is glorping the duck — over a loudspeaker and asked them to point to the correct picture. They picked out the correct image more often than we would expect them to by chance."

The research suggests that a child's language doesn't necessarily reflect their full knowledge of language and grammar.

"The beginnings of grammar acquisition start much earlier than previously thought, but more importantly, it demonstrates that children can use grammar to help them work out the meaning of new words, particularly those that don't correspond to concrete objects such as 'know' and 'love,'" Rowland said. "Children can use the grammar of [a] sentence to narrow down possible meanings, making it much easier for them to learn."

The findings were recently published in the journal Cognitive Science.