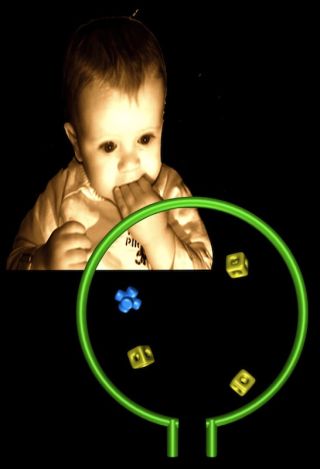 A baby watches objects bounce around an enclosure during an experiment on infant cognition.
(Image: © L. Bonatti & E. Teglas)

Babies are sophisticated mini-statisticians, a new study finds, capable of making judgments about the probability of an event they've never seen before.

Using a computer model, researchers were able to accurately predict what a baby would know about a particular event if given certain information. The model may be useful in engineering artificial intelligence that reacts appropriately to the world, said study researcher Josh Tenenbaum, a cognitive scientist at the Massachusetts Institute of Technology. The study also demonstrates just how savvy baby brains are, Tenenbaum told LiveScience.

"The deeper thing that this shows is that infants' knowledge of objects is not a gut feeling," he said. "They're actually doing some kind of rational, probabilistic reasoning."

Years of research have shown that young babies grasp all sorts of information, from the fact that physical objects can't blink in and out of existence to how social hierarchies work. One 2009 study even found that 6-month-olds can tell the difference between a friendly and an angry dog.

These studies typically rely on a method called "violation in expectation," in which researchers monitor babies' gazes as they look at normal and atypical scenarios. If a baby looks longer at an event or situation in which something is "off" (a big, strong cartoon character bowing down to a weakling, for example), that fascinated gaze indicates that the baby knows the situation is unusual.

But Tenenbaum and his colleagues wanted to go further, actually quantifying how "surprising" a given event is based on the probability of it happening. Then they wanted to see if the level of babies' surprise matched the improbability of a given situation.

The researchers set up a number of tricky videos for their 1-year-old subjects to watch. In the videos, a set of objects bounced around an enclosure with one exit. A blue barrier would then appear on the screen, covering the enclosure. Next, one of the objects floated out of the enclosure through the exit, appearing onscreen just before the barrier faded away to reveal the objects left behind. [See a video of the experiments]

The likelihood of any given object exiting depends on many factors: How many of each type of objects there are, how long the scene was covered up, how the objects are moving and where they were the last time the baby saw them. For example, in a scene in which a circle is hovering near the exit when the barrier covers the enclosure for a split-second, you'd expect the circle to pop out. In a scene where the barrier goes down for two seconds, the location of that circle might not matter as much, because other shapes could have moved closer to the exit in that time. To guess what is going to happen, infants have to pull together all the information.

Turns out, babies have this one in the bag. Their performance on the task matched that of the computer model given the same information. The implication, Tenenbaum said, is that reasoning skills blossom early.

"Even young infants' brains, before they're able to walk and talk, they are building coherent, rational models about what is happening out there in the world," Tenenbaum said, adding, "We actually think that at 12 months, they know more than this model does."

Tenenbaum said he hopes to do more experiments to refine the model, adding in concepts that babies might grasp such as friction and gravity. The researchers also want to look at different ages to find out what babies know at 3 and 6 months. The method could be used to understand babies' perception of social situations, too, Tenenbaum said.

The goal, Tenenbaum said, is a sort of "reverse engineering" of infant cognition that might help robotics developers build machines that interact with the world more like the human brain does. Theoretically, he said, a strong, probability-based model of how infants interact with the world could help researchers understand what happens when things go wrong, as in developmental disorders like autism.

"This work is a first step toward a formal theory of infant reasoning," said Elizabeth Spelke, a psychologist who studies infant cognition at Harvard University but was not involved in the current research. Further work on infant's social understanding could reveal whether the human brain is not just wired to single out objects, people and numbers, Spelke told LiveScience, but also set up to predict how those objects, people and numbers will interact.