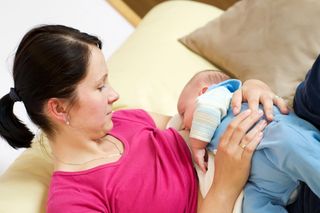 Even before infants begin to speak, words play an important role in their cognition, a new study finds.

For 3-month-old infants, words influence performance in a cognitive task in a way that goes beyond the influence of other kinds of sounds, including musical tones, the researchers said today.

Three-month-old infants were shown a series of pictures of fish that were paired with words or beeps. Infants in the word group were told, for example, "Look at the toma!" –-- a made-up word for fish, as they viewed each picture. Other infants heard a series of beeps carefully matched to the labeling phrases for tone and duration. Then infants were shown a picture of a new fish and a dinosaur side-by-side as the researchers measured how long they looked at each picture. If the infants formed the category, they would look longer at one picture than the other.

"For infants as young as three months of age, words exert a special influence that supports the ability to form a category," said Susan Hespos, associate professor of psychology at Northwestern University and one of the authors of the study. "These findings offer the earliest evidence to date for a link between words and object categories."

Participants included 46 healthy, full-term infants, from 2 to 4 months of age. Half of the infants within each age bracket were randomly assigned to the word group. All infants in the language group were from families where English was the predominant language spoken in the home. The remaining infants were in the tone group.

"We suspect that human speech, and perhaps especially infant-directed speech, engenders in young infants a kind of attention to the surrounding objects that promotes categorization," said Sandra Waxman, a co-author and professor of psychology. "We proposed that over time, this general attentional effect would become more refined, as infants begin to cull individual words from fluent speech, to distinguish among individual words and kinds of words, and to map those words to meaning."

The findings will be detailed in the March/April edition of the journal Child Development.