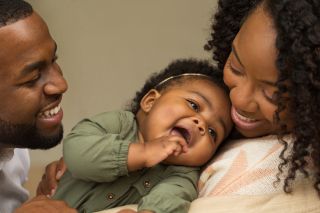 If babies had a universal trait, it would have to be their babbling. During the earliest months of their lives, babies' interactions with us basically boil down to strings of ba's, ga's and da's, punctuated by the occasional gurgle or wet raspberry.

But does this seemingly random string of sounds serve any purpose — other than to entertain besotted parents and fuel adorable social media clips? A growing body of research over the past few decades has revealed that, nonsensical though it may sound, a baby's babble actually lays the groundwork for the development of language in later life.

Amid the varied soundscape of coos, gurgles and other random noises that babies emit, babbling is recognized as a distinctive category of sound that kicks in around the 6- to 8-month mark of a baby's life. It can be defined as "the production of repetitive, speech-like syllables," said Catherine Laing, a linguistics researcher at Cardiff University in the United Kingdom, who focuses on early language development in infants. "Babble is the beginning of learning the sounds that can be used in speech," she summarized. [Why Do Babies Kick in the Womb?]

Babble is also noticeable enough that anyone paying attention to a baby's vocalizations will notice when it begins, according to Marilyn Vihman, a professor of language and linguistic science at the University of York in the United Kingdom, who has written several books on language development: "It's a really sharp change which adults can recognize. You don't have to be a linguist to recognize it."

However, being able to detect the different phases through which babble unfolds may require a closer listen. Starting out, babies will produce a range of different consonants that they develop a habit of repeating very rhythmically. Soon after, they will typically limit their exploratory inventory to just one or two consonants that they start to repeat more frequently — as in, "babababa!" or "dadadada!" Laing told Live Science. "Having a couple of different consonants that you can produce at will seems to be a prerequisite for really beginning to do words," Vihman said. "It's kind of a predictor for being able to get word forms under control, so that you can make words that people will recognize."

At this stage, babies seem to perform these long syllabic strings as a kind of reflexive motor behavior, without recognizing its practical value. But soon, those strings graduate into shorter, more clipped expressions that start to resemble words. This is something that Vihman has explored in depth over the course of her research. It's thought that this shift is driven by the baby's growing awareness of the words that adults around them are speaking — and their desire to mimic them. "Adults are like gods in their universe, the people that provide comfort, warmth and social stimulation. So the big motivation for the baby is to be like the adults," Vihman told Live Science.

Intriguingly, research shows that deaf babies also start babbling like hearing ones; it's just slightly delayed. But that progress grinds to a halt at the stage where their babble would start to sound more word-like, because deaf babies can't hear the words of the adults they'd ordinarily be trying to mimic. In hearing babies, however, after a few more months of practicing these shorter syllables, they've "picked up on word forms that are similar to the babble they're able to produce," Vihman explained. This becomes the essential bridge that equips them to start repeating words they often hear — words that they might realize have an association with something, or an impact on their listeners. (Think: "uh-oh" and "bye-bye.") [Why Do Babies Barely Blink?]

At this point — usually between the 10- to 15-month mark — babies will dish up a melange of babble and fully formed words. By the time they have a repertoire of 20 to 30 words that they're speaking regularly, what they're doing is probably defined less as babble and more as speech, Vihman said.

And, if you have any lingering doubts about the profound influence of babble on shaping language, there are several fascinating studies that have demonstrated its importance. For example, premature babies who've had tracheostomies inserted into their lungs to help them breathe are unable to make babbling sounds like healthy babies. But research has shown that when these tracheostomies are removed, babies will start babbling — even if it's several months after it should have first begun. "They still go through a babble period before they start to produce words. They sort of pick back up," Laing said — highlighting the importance of babble in laying the groundwork for speech.

Similarly, hearing-impaired babies who receive a cochlear implant to help them hear again will soon start babbling, as if they're trying to catch up on everything they've missed. "Essentially, if you think about it, it's like rehearsing the different bits of the words that you're going to go on to produce. There's a sense of preparing yourself for word production," Laing said.

So what's the main takeaway from all of this? Since babble is a stepping-stone to language, it should be encouraged through plenty of communication with babies. And while some people might think that reciting Shakespeare is best for their offspring, you'd do just as well with a bit of baby talk. "Often parents worry, is it bad to use baby talk? There's no harm, as long as you're keeping pace with your baby's development, and that as they're understanding more, you're talking in a slightly more complex way," Vihman said.

Equally, for working parents who might feel concerned about how pressured schedules and weariness affect the quality of their time — and consequently, their chat — with their babies, Laing has an interesting perspective to share. Emerging research suggests that so long as someone is talking to them — whether another caregiver, a grandparent or a sibling — babies will benefit. "Babies can be quite resilient in terms of what they draw on as an influence," Laing said. "One-to-one interaction with parents is known to be important, but interactions with a wider range of speakers can support other kinds of learning."