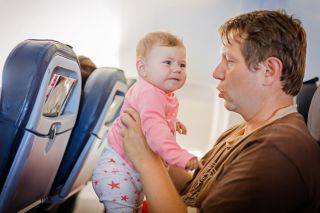 Air travel can be hard for babies.
(Image: © Shutterstock)

Whether you're the long-suffering parent or an unlucky passenger sitting in a neighboring row, a crying baby on an airplane is never fun. We've all been there. As the plane ascends or descends, baby feels the scary sensation of her or his ears popping, and a whimper that turns into a high-pitched shriek fills the cabin.

Of course, there are many reasons that a baby might cry on an airplane. Feelings of discomfort, exhaustion, hunger, loneliness, boredom, anger, pain and general unrest are all expressed by wails and tears, if not a total meltdown. However, there is general agreement that the pressure caused by flying at altitude is particularly difficult to bear for babies and toddlers. There is a fundamental anatomical difference between baby and adult ears, Dr. Simon Baer, a consultant ear, nose and throat surgeon in the United Kingdom, told Live Science. [Why Do Babies Barely Blink?]

"Certainly, one of the main reasons babies cry on planes is that they are not good at pressure equalization in the middle ear, as the infantile Eustachian tube does not generally function as well as [the one in] adults," Baer said.

The Eustachian tube is a canal connecting the middle ear to the nasopharynx — the upper throat and the back of the nasal cavity. Basically, this tube controls the pressure within the middle ear, making it equal to the air pressure outside the body. The Eustachian tube remains closed most of the time, opening only for activities such as yawning, swallowing and chewing, which allows air through the passage between the middle ear and nasopharynx. When atmospheric pressure changes rapidly, causing a sudden feeling of blockage in the ear (such as during airplane travel), most adults yawn or swallow on purpose to open the tube and equalize the pressure within the middle ear.

Baer added that the pressure is particularly problematic during the descent, as equalization is more difficult going from a low atmospheric pressure to a relatively higher one, which happens as the plane goes down for its landing.

"While the problem can occur on ascent, the way the tube works means that it is easier to adjust from a higher atmospheric pressure to a lower pressure, which is what happens when we ascend," he said. "Although modern aircraft are to a certain extent pressurized, there are still significant air pressure changes in the plane from the ground pressure to the pressure when flying at 30,000 feet [9,100 meters]."

But there are ways to help out baby's ears. Another good way to equilibrate the pressure differential in the middle ear is through the so-called Valsalva maneuver — that is, pinching the nose and blowing, according to a 2007 review in Paediatrics & Child Health, the official journal of the Canadian Paediatric Society.

Baer had even more advice.

"Three ways that can assist include making sure the baby is awake on ascent and descent, getting baby to suck a bottle at these times, and perhaps avoiding flying when the baby is suffering with an upper respiratory tract infection," Baer said.

Gordon Harrison, the chief audiologist at the U.K. optical and hearing retail chain Specsavers, told Live Science that a simple way to help ease the effects of pressure on the ear is to introduce as much air as possible to the ear via swallowing or yawning. However, he admitted that this is not always easy when dealing with a hysterical 1-year-old.

"It's much easier to mitigate the effects of ear pressure in adults than in babies," Harrison said. "However, while tricks like sucking on a hard-boiled sweet, chewing gum, yawning or drinking through a straw during takeoff and landing all help, these are obviously not things a baby can do."

Harrison also suggested giving the baby a bottle or pacifier to suck on during takeoff and landing, or breastfeeding at those times.

"Rest assured, though, that usually the pain is only temporary," he said. "It won't cause any lasting problems and most likely will ease within a few minutes as the Eustachian tubes open to let the air pressure equalize on both sides of the eardrums."