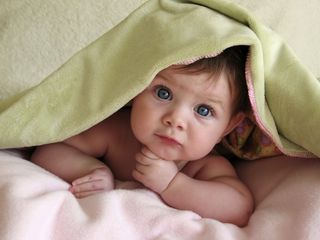 You named me what?
(Image: © Jamey Ekins, Shutterstock)

Babies are amazing, and a new study published in May 2012 in the journal PLoS ONE only adds to this view: Babies of ages 7 months and 8 months weed out situation with just the right amount of information to make for the most efficient learning. These situations turn out to be not too simple (that's boring) and not too complex (that's too difficult to be worth their brain time). Read on to see how the researchers looked into babies' brains.

Lead author Celeste Kidd (shown here) says it's easier to study babies than adults, who know they are taking part in a psychology experiment.

Each of the baby participants sat on his or her parent's lap while watching a screen. The parents wore headphones and a visor so as not to distract the little ones.

In one of the experiments, babies watched a computer screen on which objects would pop out of three colored boxes. The researchers changed when and where the objects would appear, with some sequences being more complex (more surprising) and some very simple and predictable. A simple sequence would be one in which a shoe, say, popped out of a pink box 10 times; there's a good chance the next "event" would also be a shoe popping out of a pink box.

As long as the babies stared at the screen, the events being played out continued; but as soon as they looked away, suggesting no more interest, the trial ended.

Across two similar experiments, babies consistently lost interest when the video became too predictable, which meant the probability of a subsequent event happening was very high.

So if your little one is getting fussy by the funny faces you're making, change it up and add another expression or sound to boost the learning potential.