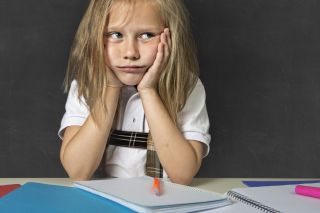 The way you view failure may influence how your children view their own abilities, a new study finds.

They found that parents who see failure as a major setback may be encouraging their children to think that intelligence is fixed. In contrast, parents who see failure as a learning opportunity may be nudging their children toward thinking that intelligence can be increased with hard work, according to the study, which was published April 25 in the journal Psychological Science.

"Children's belief about whether their intelligence is just fixed or can grow can have a large impact on their achievement and motivation," Kyla Haimovitz, a graduate student at Stanford University and the lead author on the study, said in a statement. However, little is known about how children may develop one view of intelligence rather than the other. [10 Scientific Tips for Raising Happy Kids]

How kids think about intelligence

In the study, the researchers identified two "mindsets" for how children think about their own intelligence: a fixed mindset and a growth mindset.

Children with a fixed mindset believe that their level of intelligence cannot change, and they may stop trying when work becomes too difficult and, eventually, achieve less, the researchers wrote in the study.

On the other hand, children with a growth mindset think their intelligence can increase through hard work, the researchers wrote. These children are more likely to work harder when their work becomes difficult.

So the researchers turned to parents' views of failure, to see whether that might influence children's mindsets about intelligence. In the study, they carried out a series of surveys, both online and in person, asking parents about how they viewed failure, and how it influenced their parenting style, according to the study.

Additional surveys asked children about their beliefs regarding their intelligence, as well as whether they were aware of how their parents viewed failure. A final survey asked parents to react to a hypothetical scenario in which their child had failed at something.

The researchers found that when parents viewed their child's failure as a debilitating experience, their children tended to have a fixed mindset of intelligence. This may be because these parents react to such failures by focusing on their child's ability, rather than on how their child could improve, the researchers wrote. [5 Ways to Foster Self-Compassion in Your Child]

Instead, it would be more beneficial to the children for parents to approach failure as a learning experience, the researchers proposed.