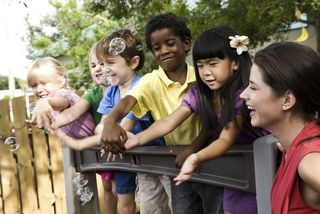 For young children, being taught prejudiced ideas trumps positive experiences when it comes to attitudes toward other groups of people, a new study finds.

First-graders who are told by an adult that another group of kids is "mean" evaluate that group negatively even if they have a positive interaction with the supposedly mean kids. By fifth grade, however, children rely more on their own experiences with the "mean" kids to make judgments.

The findings could have implications for how schools teach about diversity and prejudice.

"Our work suggests that older children are going to be more influenced by their own experiences, so it's not enough for us to lecture to them about equality and diversity-related issues," study researcher Sonia Kang, a psychologist at the University of Toronto, said in a statement. "We need to help create situations and environments that foster positive experiences among children from all backgrounds."

Kids develop an understanding of prejudice and discrimination in a fairly predictable manner. Between the ages of 3 and 6, they begin to understand and use stereotypes. After age 6, children start to understand other people's stereotypes, scientists have found. By first grade, they grasp that discrimination based on gender or race is morally wrong. [10 Cool Facts About the Brain]

To figure out how children synthesize this information, Kang and her colleague Michael Inzlicht of the University of Toronto Scarborough conducted two studies. In the first, they told 161 first-, third- and fifth-graders that they were going to play a game in which they'd either be on the red team or the blue team. In fact, all the kids were assigned to be on the red team — there was no blue team.

The kids were given three red cups and three blue cups and told that they could put up to 10 stickers or candies in each cup, and that those prizes would go to the kids who owned each cup. Next, the experiment diverged. Some kids were told that kids on the blue team were always mean to kids on the red team. Others weren't told anything, but were given their own empty "prize" cup, ostensibly from a member of the blue team who had given them no prizes at all. A third group was both warned that kids on the blue team were mean and given an empty cup as firsthand experience of their meanness.

After this game, the kids were asked a series of questions about how they felt about the blue team. The results revealed that first-graders who had a negative first-person experience with a blue team member — the empty cup — still rated the blue team more positively than if they'd been told that blue team kids were mean. In other words, these 6- and 7-year-olds took an adult's word at greater value than they did their own nasty experience. (Naturally, hearing bad things and receiving an empty cup led to the worst ratings of all.)

Third-graders, on the other hand, rated blue team members equally negatively whether they'd heard bad things about them or had a bad experience. By fifth grade, kids weighed their own experience more highly than an adult's assessment, rating blue team kids more negatively if they'd gotten an empty cup than if they'd heard an adult speak poorly of them.

In a second study, the researchers decided to find out how kids would feel about an outgroup if the adult's statement didn't match their experiences. With a new group of 148 kids, the experimenters repeated the first study; this time, some of the participants were told that blue team kids were mean while receiving a generous "prize" from a blue team member, while others were told that blue team kids were nice while receiving an empty cup.

Again, first-graders trusted the adult more than they did their own experience, rating blue team members equally badly when they'd heard something nasty about them whether they'd gotten a generous gift or no gift. By fifth grade, a positive experience outweighed a negative assessment by an adult, and kids improved their view of blue team members based on a generous prize.

The point, Kang said, is that adults can shape expectations of prejudice and stigma in young children, suggesting that negative warnings about discrimination in early childhood could backfire. Instead, Kang said, teachers and parents should focus on the positive aspects of diversity.

"While it is important to equip children with the ability to recognize discrimination when it happens, we don't want them to shut themselves off from the possibility of positive relationships with members of groups different from their own," she said.

The research appears in the March 2012 issue of the journal Personality and Social Psychology Bulletin.