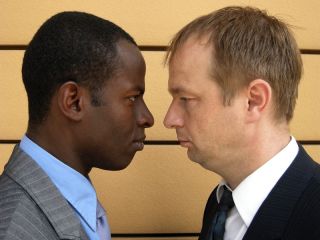 Like their cavemen ancestors who fought outsiders for land and potential mates, the modern guy still holds such prejudices against "outgroups," new research shows.

Whereas men's prejudicial views towards outgroup males are often motivated by aggression, women's biases stem from fear, and these different psychologies evolved from our history of group conflict, the researchers said.

That's the basic premise of the so-called "male warrior hypothesis," formulated by Carlos Navarrete, a psychologist at Michigan State University, and his colleagues. To come to their conclusions, the researchers analyzed the breadth of social science literature on intergroup biases, group conflict and sexual selection.

They found that men and women played vastly different roles in past group conflicts, and these differing positions led to their distinctive psychologies today.

Men are from Mars

From small-scale raiding of hunter-gatherer societies to all-out warfare between nation states, human history is wrought with violent clashes between differing groups. "This group conflict is primarily perpetrated by men, who see other men as competition and build up a psychology of aggression against them," Navarrete told LiveScience. [The History of Human Aggression]

In the past, attacking other groups allowed men to gain access to territory, land, status and potential mates. This hostility against "outgroups" is still present in men today: Studies have shown that men are generally more xenophobic than women, and they are more likely than women to dehumanize members of other groups, such as by describing them as animals, the researchers found.

At the same time, men identify more strongly and cooperate better with men in their own group than do women. In one reviewed experiment, men were more likely than women to put aside selfish motivations in a public goods game — which involved donating money to a group fund or keeping it to themselves — when the success of their group was at stake. This tendency is also tied to history, as men needed to cooperate within their group to conduct a successful raid, the researchers say.

Given that chimpanzees, one of our closest genetic relatives, form aggressive male coalitions to conduct border patrols, the researchers propose that these violent behaviors against outgroups were likely shared by a common ancestor.

Women are from Venus

Women, being a prime target of raiding men, have developed a fear of strangers to protect themselves from sexual coercion and their offspring from infanticide.

In a previous study, Navarrete found that white women evaluated black men differently depending on where they were in their menstrual cycle; they rated the men most negatively, in terms of attractiveness and scariness, when they were most likely to conceive. Other studies found that, regardless of race, women view physically formidable men more negatively than weaker-looking men. Taken together, the researchers suggest that women may instinctually avoid people who pose the greatest reproductive threat — formidable outgroup males.

But women's fear-born prejudices don't lead to wars, Navarrete noted. "There have never been any bands of women that group together to raid and kill other women," he said.

David Geary, a psychologist at the University of Missouri who was not involved in the study, said he agrees with the male warrior hypothesis, having outlined a very similar idea in his book, "Male, Female: The Evolution of Human Sex Difference" (American Psychological Association, 1998).

"[The new study] is getting at some of the details of male cooperation and competition, and supporting the ideas with a little more fine-grain experimental studies," Geary told LiveScience. But these conclusions should not be taken to mean that all war falls on the shoulders of the male sex drive, Geary said.

Navarrete said he thinks that the hypothesis has clear implications for minimizing war. For one, he said, "women getting political power and being decision-makers would be helpful."

Another idea Navarrete proposed for decreasing wars would be to eliminate "outgroups" by bringing about a shared identity across the globe. "Then the only outgroup would be aliens," he said.

The research was published Jan. 24 in the journal Philosophical Transactions of the Royal Society B.