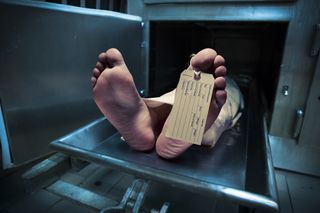 You're more likely to die on this day of the week.
(Image: © Fer Gregory / Shutterstock.com)

No, it's not spooky, creepy Halloween — the most deaths occur on regular old Saturdays.

Death can strike on any day of the week, but at Live Science we wanted to know if national data might reveal that some days are deadlier than others. To figure out which day of the week claims the most lives, we turned to data from the Centers for Disease Control and Prevention (CDC).

The CDC's Wonder database contains data on all deaths in the U.S. from 1999 to 2014, and we found that, all told, there were more than 39 million deaths over the course of these 15 years. (Keep that time frame in mind as you read on — the numbers below represent the total number of deaths for this period.) [The Odds of Dying]

So, nothing to see here? Not so fast. When we dug a little deeper, we found some interesting differences in the days that people die.

We found that deaths due to heart attacks peaked on Mondays, with a total of 348,206 fatal heart attacks reported by the CDC. Tuesday ranked second for heart attack deaths, with 337,918.

Interestingly, other research bears out this trend; a 2005 meta-analysis concluded that sudden cardiac deaths in the U.S. were more likely to occur on Mondays, regardless of people's age or sex.

Tuesdays saw the highest number of deaths from the flu and pneumonia — 134,567 — though Wednesdays came in a very close second, with a total of 134,525 deaths from these diseases.

Deaths from car crashes, however, were the lowest on Tuesdays. Over the 15-year period, there were a total of 28,523 deaths from this cause on Tuesdays.

Wednesdays fell smack dab in the middle for the total number of deaths that occurred over the time period: 5,606,470.

Though Thursdays didn't have the lowest total number of deaths overall, this day had the fewest deaths from heart attacks, diabetes and firearms.

But accidents include many things. We looked deeper and found that the greatest number of car crash deaths occurred on Saturdays (42,332), followed by Sundays (39,943) and then Fridays (36,167).

Firearm deaths also peaked on the weekends, increasing from between 23,000 and 25,000 total on the different weekdays to more than 31,000 deaths during the Saturdays and Sundays of the study period. Here, Sunday had slightly higher numbers, with 32,314 firearm deaths, about 500 more than Saturday.

On a much smaller scale, the greatest number of deaths due to "contact with a venomous plant or animal" (that's the official term for it) also occurred on Saturdays. Over the 15-year period, there were a total of 216 reported deaths from a poison plant or animal on Saturdays, we found. Those numbered dropped off on Sundays, to the weekly low of 169 deaths.