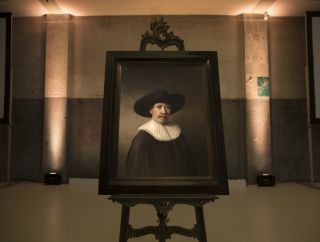 A computer algorithm analyzed all of Rembrandt's work to learn the Dutch master's style and technique, before re-creating it in a new painting.
(Image: © The Next Rembrandt/ING)

The picture, which shows a man looking away, had the rich colors, subtle emotion, characteristic brushstrokes, and evocative play of light and shadow so characteristic of the Dutch master's style.

But it turns out this mysterious picture wasn't a long-lost Rembrandt canvas uncovered in some forgotten 17th-century warehouse: It was instead made out of whole cloth by a computer algorithm and a 3D printer. The computer algorithm created the "new Rembrandt" after painstakingly studying the painter's entire corpus, then mimicking Rembrandt's painting techniques, styles and subjects.

While the artistic merits of the painting are a matter of personal opinion, the process could reveal more insights into the great master's works, said Gary Schwartz, an art historian and author of "Rembrandt’s Universe: His Art, His Life, His World" (Thames & Hudson Ltd., 2014). [Gallery: Hidden Gems in Renaissance Art]

"While no one will claim that Rembrandt can be reduced to an algorithm, this technique offers an opportunity to test your own ideas about his paintings in concrete, visual form," Schwartz said in a statement.

Following in the footsteps of a master

Rembrandt Harmenszoon van Rijn is known as one of the greatest painters who ever lived. Born in Amsterdam in 1606, the master was famous for his realistic subject matter, rich color palette, subtle and nuanced depictions of emotion, and gorgeous use of shadow and light. (Like many other famous painters, he died penniless, in 1669, after years of hard times.) Rembrandt painted at least 346 paintings in his life, including the iconic "Night Watch" and "Storm on the Sea of Galilee."

The new Rembrandt project was conceived as a type of advertisement for the banking organization ING. The company approached data scientists at Microsoft and art-reproduction experts at TU Delft University in the Netherlands, along with the advertising agency J. Walter Thompson, to see if they could create the "next Rembrandt" painting.

The first step in the process was to gather high-resolution digital scans of all 346 images in the painter's body of work, then upload them to a computer algorithm that used deep learning to grasp the basics of Rembrandt's corpus.

From there, the team had to decide what the subject matter of their painting would be. Given that most of Rembrandt's paintings are portraits, it didn't take long for the computer program to settle on a portrait.

To figure out who would be depicted, the team then used algorithms to pick out the finer details of the subject matter. The computer program settled on a Caucasian white male between the ages of 30 and 40, sporting facial hair and donning the plain black and white clothing so characteristic of Rembrandt's work. The algorithm also determined that the man should be looking to the right, according to the project's participants. [Image Gallery: How Technology Reveals Hidden Art Treasures]

Next, a separate set of algorithms analyzed the typical geometry, composition and painting materials used by Rembrandt. From there, a facial-recognition program picked out the techniques the Dutch painter used to capture the eyes, nose, mouth and other features of his subjects. From there, the program began composing its picture, sketching out each of the facial features separately, then putting them together to form the face. (Clearly, human and computer painters use pretty different techniques.)

Finally, once the 2D image was complete, the team added depth by analyzing the ridges, bumps and dents typically found on a piece of canvas, then superimposing them on the flat image. That created the depth and texture found when a painter puts oil on canvas.

The team then painted the image using a 3D printer that used 13 layers of UV-based ink to create a realistic picture.

It's not clear that experts will see genius in the new piece of art. (Writing for The Guardian, art critic Jonathan Jones called the project a "new way to mock art, made by fools.") But it's clear that computer algorithms have come a long way since the first primitive algorithms and dot-matrix printers.

"When we embarked on this journey, we didn't know the outcome," Bas Korsten, executive creative director of J. Walter Thompson Amsterdam, the advertising agency involved in the project, said in a statement. "Can you teach a computer how to paint like Rembrandt? Can you distill Rembrandt's artistic DNA to create new art? All I can say about the outcome is that I see a person, not a computer image."