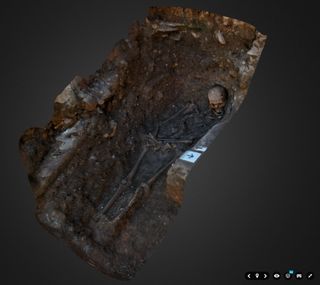 Scientists have created an interactive digital model of King Richard III's grave and skeleton. Enthusiasts can explore the model with the 3D-sharing platform Sketchfab.
(Image: © University of Leicester)

A new digital model of the original grave of English King Richard III offers a three-dimensional glimpse into this humble resting place.

Richard III's lost skeleton was discovered under a parking lot in Leicester in 2012. He'd been buried in a too-short, hastily dug grave after his death in the Battle of Bosworth Field in 1485. One year ago, the king got a long-delayed royal funeral when his remains were re-interred in Leicester Cathedral.

In honor of this one-year anniversary, the University of Leicester has released a digital 3D model of Richard III's original grave. The model highlights features of Richard's grave and skeleton, including the king's missing feet, which were lost sometime between 1485 and the modern day, when someone dug a trench that severed them. [Gallery: The Search for Richard III's Remains (Photos)]

The scientists created the model using photogrammetry, a technique in which special software melds together two-dimensional photographs in order to create a three-dimensional model. The software matches points on each picture and calculates distances between them to reconstruct their locations in three-dimensional space. The technique is increasingly easy and cheap with digital photography, and has become widespread in archaeology and paleontology alike.

"During the excavation in 2012, we took photographs of the skeleton from multiple angles to create a lasting record of how the king's bones were positioned in the grave before we exhumed them," site supervisor Mathew Morris of Leicester Archaeological Services said in a statement. "These photos were not taken with photogrammetry in mind, but the software is incredibly versatile and can be applied retrospectively to create this superb model."

The model can be manipulated with the click of a mouse and includes annotations explaining some of the grave's features. The sloping, uneven walls reveal that the grave was dug hastily. Richard III's skeleton was also slumped into the hole, and did not lay flat because the grave was too short.

Historical records show that the king's body was taken to Leicester after his death and buried in the Grey Friar's churchyard. It was a brutal and humiliating end for Richard III. He'd been stabbed repeatedly in the head and face. One wound to the back of the skull probably represented the killing blow, inflicted by a sword or halberd entering the king's brain. Other wounds on the corpse suggest that his body had been abused after death.

The discovery of Richard III's skeleton has allowed researchers an unprecedented glimpse into his life, revealing his scoliosis, his diet and even his parasites.

Anyone interested in exploring the king's remains can do so on the 3D-sharing platform Sketchfab.