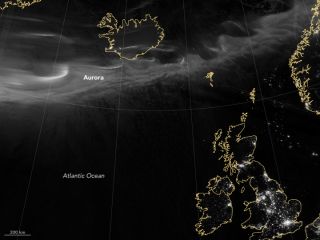 A NASA satellite caught a glimpse of the spectacular aurora borealis phenomenon from above on March 7, as stargazers across northern Europe viewed the brilliant shades of green and pink from their backyards.

Using a low-light sensor on the Visible Infrared Imaging Radiometer Suite (VIIRS), the Suomi NPP satellite captured a view of the aurora, revealing streaks over Iceland, England, Scotland and Norway. The sensor detects dim light signals such as airglow, gas flares, city lights, and reflected moonlight but since the sensor does not distinguish between different colors of light, the aurora appears white. The image was released by NASA's Earth Observatory this week.

The aurora borealis, also known as northern lights, is a vivid demonstration of Earth's magnetic field interacting with charged particles from the sun. The charged particles are created when protons and electrons stream out from the sun's surface in massive eruptions, known as coronal mass ejections, and rush toward Earth in a steady stream called the solar wind. The solar wind slams into Earth's magnetic field, creating disturbances in the atmosphere. [Aurora Photos: Northern Lights Dazzle in Night-Sky Images]

These storms from the sun energize particles already trapped in the magnetic field surrounding Earth. The electrons then race down Earth's magnetic field lines and crash into the gases at high altitudes. They impart energy to molecules of oxygen and nitrogen gases, thereby exciting electrons in the gas molecules. As the excited electrons return to their normal state, they release photons — small bursts of energy — in the form of light. Oxygen gives off a green color and nitrogen produces blue or red colors.

But it's not often that these psychedelic lights are visible south of Scotland. According to NASA, this geomagnetic storm reached a G3, or "severe," level on NOAA's geomagnetic storm scale, coloring night skies over a much wider swath of northern Europe as a result.