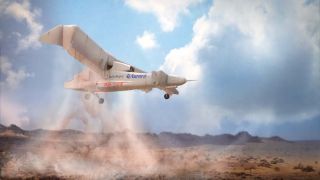 The proposed LightningStrike plane is designed to take off and land vertically.
(Image: © Aurora Flight Sciences)

An unmanned aircraft that can take off, hover and land vertically could be closer to reality, as part of a Defense Advanced Research Projects Agency (DARPA) program to develop these futuristic flying machines.

Aurora was one of four companies competing in the first phase of DARPA's VTOL Experimental Plane (X-Plane) program. The other competing companies were The Boeing Co., Karem Aircraft Inc., and Sikorsky Aircraft Corp., according to DARPA. [Supersonic! The 10 Fastest Military Airplanes]

"Aurora is proud to support DARPA on what we all hope to be a truly historic breakthrough in aviation technology," John Langford, chairman and CEO of Aurora, said in a statement. "If successful, VTOL X-Plane’s radically improved flight capabilities could lead to revolutionary advancement of the U.S. military's future mission capabilities."

Langford said Aurora plans to build a demonstrator aircraft, known as LightningStrike, that will have the following qualities:

-Raise aircraft hover efficiency from 60 percent to at least 75 percent;

-Present a more favorable cruise lift-to-drag ratio of at least 10, up from 5 to 6. (Aircraft have high L/D ratio if they produce a lot of lift or have a small amount of aerodynamic drag, according to NASA.); and

Aurora is collaborating closely with Rolls-Royce PLC and Honeywell International Inc. to reach a number of milestones. For instance, LightningStrike will be the first aircraft to have distributed hybrid-electric propulsion ducted fans, meaning the hybrid propulsion units are spread out along the aircraft to provide thrust for the plane.

LightningStrike will also have an "innovative" synchronous electric-drive system, tilt-wing and tilt-canard-based propulsion for vertical takeoff and landing (a canard is a wing configuration on the aircraft) and high efficiency for both hover and high-speed forward flight, according to Aurora.

The aircraft will be made with a Rolls-Royce AE 1107C turboshaft engine that can power three Honeywell generators and 24 ducted fans that are distributed on the wings and canards. Moreover, LightningStrike's electric distributed propulsion system is designed to have integrated and distributed ducted fans that, along with the synchronous electric drive system, would help the aircraft efficiently move forward at a high speed, Aurora representatives said.

The company is aiming to begin test flight in 2018, company representatives said.