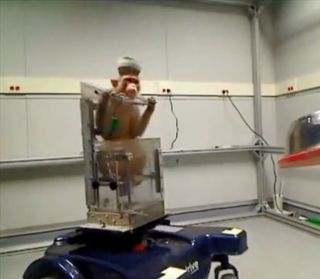 A monkey controls a wheelchair using only his thoughts. His goal? A bowl of tasty grapes.
(Image: © Screenshot from Rajangam et al, 2016)

Monkeys equipped with wireless brain implants were able to control robotic wheelchairs using only their thoughts, according to a new study.

The brain waves of two rhesus macaques were used to direct motor commands on a motorized wheelchair. The monkeys were initially trained to navigate the wheelchair by simply watching it move, the researchers said. The new findings could one day improve the mobility of the most severely disabled people, such as those with Amyotrophic Lateral Sclerosis (ALS), who cannot even move a cheek or eye muscle, the scientists added.

"In some severely disabled people, even blinking is not possible," Dr. Miguel Nicolelis, co-director of the Duke Center for Neuroengineering, said in a statement. "For them, using a wheelchair or device controlled by noninvasive measures like an EEG [electroencephalogram] — a device that monitors brain waves through electrodes on the scalp — may not be sufficient. We show clearly that if you have intracranial implants, you get better control of a wheelchair than with noninvasive devices." [See video of a monkey moving a wheelchair with its brain]

The new experiment isn't the first time that scientists have created a so-called brain-machine interface. In a 2009 study, researchers showed that people with electrodes implanted in their brains could type with just their thoughts. In 2012, a quadriplegic used thoughts to move a robotic arm. And in 2013, Nicolelis and his colleagues showed that monkeys could move robotic arms with their minds.

To expand upon their earlier work, Nicolelis and his colleagues implanted hundreds of tiny electrodes into the premotor cortex, which helps plan movement, and the somatosensory cortex, which helps process the sense of touch, of two monkeys. They then trained the monkeys to use their brain waves to navigate the wheelchair toward a bowl of tasty grapes. Nicolelis and his colleagues then recorded their brain waves from 300 brain cells, or neurons, during this process. The scientists translated those brain waves into commands for a motorized wheelchair. [Image Gallery: The Incredible Bionic Man]

Over time, the monkeys got better at the task, navigating towards the bowl of grapes more quickly and with fewer wrong turns,  the researchers reported online March 3 in the journal Scientific Reports.

The team found that the monkeys were not only producing brain signals associated with translation and rotation, but they were also evaluating the distance between the bowl of fruit and the chair.

"This was not a signal that was present in the beginning of the training, but something that emerged as an effect of the monkeys becoming proficient in this task," Nicolelis said in a statement. "This was a surprise. It demonstrates the brain's enormous flexibility to assimilate a device, in this case a wheelchair, and that device's spatial relationships to the surrounding world."

In follow-up work, Nicolelis and his colleagues want to expand their neuronal recording to a greater number of brain regions, in order to improve the brain-computer interface.