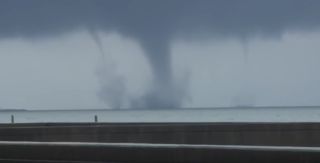 Severe storms have been hammering the southeastern United States this week, with tornadoes and strong winds tearing through towns from Louisiana to Florida. In New Orleans, stormy weather on Tuesday (Feb. 23) created a unique phenomenon over Lake Pontchartrain: three simultaneous waterspouts whirling across the water.

There are two main categories of waterspouts: fair weather and tornadic, according to NOAA. Fair-weather waterspouts typically develop on the surface of the water and move upward. They tend not to move much, and aren't generally associated with thunderstorms, NOAA said.

Tornadic waterspouts, on the other hand, behave similarly to land tornadoes: They develop downward and can migrate. The waterspouts spotted earlier this week were likely of the tornadic variety —one main tornado developed first, followed by two satellite tornados, reported The Washington Post. However, that particular storm did not produce any other tornadoes, according to AL.com, and the three waterspouts seen over Lake Pontchartrain did not make landfall. [Weirdo Weather: 7 Rare Weather Events]

The formation of any tornado is associated with supercell thunderstorms, which are storms with deep rotating updrafts, or mesocyclones, according to National Geographic. However, not all supercells produce tornadoes. In fact, the events surrounding tornado formation remain mysterious, and scientists "still don't know why some thunderstorms create tornadoes while others don't," legendary storm chaser Tim Samaras told National Geographic in 2013. (Samaras and two other members of his storm-research team were killed in May 2013 by a violent tornado in El Reno, Oklahoma.)

Tornadoes are notoriously difficult to predict, because they can form so quickly and can move erratically. The average warning time for a tornado is 13 minutes, reported National Geographic.

Researchers do know that high relative humidity, wind changes in the lower atmosphere and a specifically placed downdraft are necessary ingredients to create a tornado. Temperature also plays a crucial role, according to National Geographic. Cold, dry air must lie above warm, moist air to generate a tornado. The warm air will rise rapidly, and the changing winds in a supercell will rotate the updraft. The process is finicky, though, and if the air is too cold it can choke the inflow of new air and kill the tornado, reported National Geographic.

Satellite tornadoes are a weather phenomenon in which smaller tornadoes rotate around a central, primary tornado, all interacting with the same mesocyclone. In other circumstances, a tornado can have several vortices inside of the main vortex, but these are much harder to see with the naked eye, according to NOAA. These weather events are all distinguishable from tornado outbreaks, in which multiple tornadoes originate from separate supercells.

Two or more simultaneous tornadoes can be seen if a new tornado spins up before an existing tornado dies, or if a particularly violent storm creates enough turbulence to produce several vortices. But a true satellite tornado is characterized by a peripheral location and because it orbits a primary tornado, according to NOAA's Storm Prediction Center in Norman, Oklahoma.

In June 2014, twin tornadoes struck the small town of Pilger, Nebraska. The Storm Prediction Center reported that such an event was likely to occur only every 10 to 15 years, making this week's Lake Pontchartrain event appear even more rare.

NOAA's Storm Prediction Center issued tornado watches for south Louisiana, Mississippi and parts of Alabama earlier this week. The system proceeded up the East Coast, wreaking havoc in Florida, North Carolina and Virginia. Tornado watches were issued in parts of the Northeast, including in the District of Columbia, Delaware, Maryland, southern New Jersey, southeast Pennsylvania and Northern Virginia.