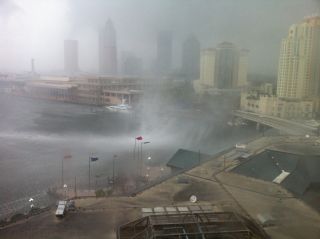 As a waterspout sped toward Tampa, Fla., this morning (Feb. 26), a quick-thinking weather watcher snapped the vacation photo of a lifetime.

The photos show dark, stormy skies and water swirling above the bay. The waterspout came ashore as a tornado with 60 mph (96 kph) winds, according to a statement from the National Weather Service's Tampa Bay office.

The tornado then hit the Westin Hotel and proceeded down a channel between the Tampa Bay Times Forum and Harbour Island, the NWS said. The twister lifted just east of the Florida Aquarium, traveling about 4,500 feet (1,360 meters) in all. Wind gusts associated with the tornado reached 75 to 85 mph (120 to 136 kph).

The entire Tampa Bay region was under a tornado watch for the morning as a cold front moved in from the north. The watch was canceled around 1 p.m. EST.