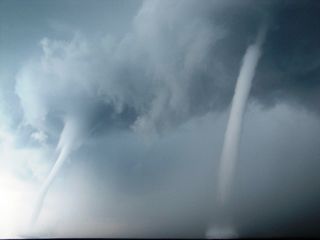 A scientist caught the birth of rare twin waterspouts on camera as the twisters churned to life over Louisiana waters yesterday (May 9). One of the powerful and unusually long-lived twisters damaged homes and cut power as it barreled across Grand Isle, a long, narrow island along the southeastern leg of the state's Gulf coastline.

The tornadoes formed at the front edge of a powerful storm system that moved across the region yesterday afternoon.

Tim Osborn, a scientist with the National Oceanic and Atmospheric Administration's Coast Survey was just finishing up a meeting on Grand Isle when he spied a man out the window do a double-take and point to the skies.

"He came running in and said, 'There's a waterspout out there!'" Osborn told OurAmazingPlanet. So Osborn grabbed his camera and started snapping, catching the birth of not one, but two waterspouts as they spun up over waters just north of the island. [Images: Twin Waterspouts Form]

"You could clearly see them forming in the sky," he said, "and I was able to get them on the camera as they were starting to drop."

Two spinning vortexes formed in the clouds and dropped lower and lower, until they reached the waters below, kicking up spray as they moved in formation toward the island.

Osborn said he immediately called colleagues at the National Weather Service, who told him they'd been tracking the storm system. Less than 30 seconds later, tornado sirens began to wail.

Osborn said that, in comparison to waterspouts he's seen in the past, these twisters were "really surprising. They not only grew in size, they traveled in tandem, and lasted longer than most — about 10 or 15 minutes."

The most common type of waterspout, called a fair-weather waterspout, is a short-lived affair that forms in the water itself and climbs skyward. They're typically far smaller and less dangerous than the waterspouts pictured above, known as tornadic waterspouts.

These twisters can stay intact as they move over land, as Osborn observed, and sometimes wreak havoc as they do.

"The one on the right was actually coming right at us," he said. "As it got closer, you could see that eye wall rotating, and rotating fast, and you could hear it ripping across the water."

Osborn — and the Grand Isle residents who let him stand on their deck to take his pictures — were ready to head to the reinforced storeroom that was just a stairwell away at a moment's notice.

One of the twisters plowed across the island, cutting power lines, ripping the roof from one home and battering seven others, and then continued out to the Gulf of Mexico. It left a swath of damage a quarter-mile long and 400 feet (122 meters) across, according to the National Weather Service.

Power was restored about two hours after the storm hit, according to local media, and there are no reports of injuries.

"The early detection, the sounding of the alarm, and police being out there with sirens was a very important effort that alerted people we had severe weather," Osborn said. "I believe that really was helpful in making sure people were aware, and that nobody got hurt."